This blogging journey (that I feel like I'm still on the first lap of) has brought a lot of growth to my self-esteem. Before you get all blustery thinking I'm bragging, let me explain. I'm a recoverING anorexic (like alcoholism, it's always with you, and unlike alcoholics who can just quit completely, those of us who struggle with food, can't quit food completely. Well, not anymore. I already did that, and therein lay my problem ;-) But writing, and even being brave enough to write about that , has brought healing. I'm still pretty hesitant out there, though.
That might not make sense to those of you dear readers who've been with me since 2009. I come across as rather arrogant and self-confident at times. But have you seen my face? It's on my blog once, hidden behind my YellowBoy, in Alaska, and I only included it because it had almost our entire group AND the glacier. Not only was there safety in numbers, it was on an Alphabe-Thursday where everyone is running hell bent for leather all over cyberland trying to visit as many blogs as possible, so I thought I was pretty safe. One or two people commented. And that's how I wanted it.
Now I'm feeling better. Don't know if it's being over a year removed from the job loss which sent me spinning into a pit of despair, or also a year removed from the whooping cough which left me winded and on the side-lines. I am still dealing with the hip thing, but I thank God that the pain is down to a 3 or 4 (out of 10) and that's a place where I can live for a while. After all, I've lived with my fused wrist and its chronic regional pain syndrome for eleven years now, and on a good day, it's a 6. But I'm not just talking physically better. I feel better on the depression scale, too. (Chronic pain and depression have one of those chicken/egg relationships...) So without further ado, I give you: me. 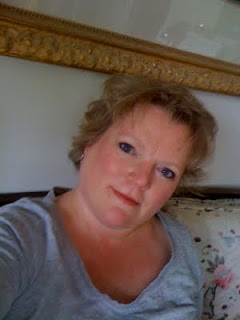 I took no less than 47 self-portraits. I'm willing for you to see this one.  I'm a work in progress.  If you're interested in the other stories I alluded to...help yourself.
Posted by Tina at 8:11 PM

nice to meet you tina...smiles.

You are a beautiful lady and a very good blogging friend. I'm so glad to finally see your pretty face! Love you!

With every step you take towards life in it's fullest, heaven's song get even louder :)This blog post made the song go up a whole new level.

and if i could figure out how to share pictures from Picasa, i'd show you me too!

One of these fine days, I might even add a photo of me to my blog... Maybe :p

Well done you! Lovely to see you :)

Fabulous! You're just beautiful! I'm glad to hear your hip is in a better place now. Congratulations on your journey -- it's inspiring.

I missed this post the first time around, but I guess I missed about 1200 other posts on that day. It's good to meet you face to face or I guess I should say to see what you look like. I often wonder about the face behind the blog since many don't show photos. I don't usually put up current photos of myself though I have on occasion. Whenever I've tried the self-portrait thing they always turn out kind of goofy and not tasteful like your photo--good job of self picture taking.

Maybe one day we can all meet in person.

Lee
Blogging from A to Z

I am visiting your 'unveiling' feom your about me page as I peruse the hosts of A to Z challenge. I'm recuperating myself from knee surgery a few days ago and so have some time to investigate more of the blogging world than my time usually allots. I thank you for your transparency and I hope I can take the time to know you better. I really appreciate seeing who I am reading and knowing them as well. So thank you for sharing yourself. God bless, Maria http://delightdirectedliving.blogspot.com/

Hi Tina - I drink my morning coffee from a Life Is Good mug. My golf caps say Life Is Good. Naturally when I saw your blog name on the list of A to Z Challenge participants, I had to come meet you! I have enjoyed several of your posts and will be back for more. I am a newbie blogger and virgin A to Z participant.

Thank you for being brave and trusting enough to share your photo. Each of us deals with demons - mental or physical illness or wounds. Life throws stuff at us; people hurt us or disappoint us. Surrender or persevere. Those are our options. Your determination inspires and your writing encourages.

I just learned that you're gone, an angel above us. I wish I'd taken the time sooner, but life does have a way of limiting our reach. From what I've read, from you, about you, and about you from your friends, you were a most beautiful person. I wish for your new journey health, love, and the ability to follow and fulfill each dream. You will be missed. Thank you for sharing you with us!