Since we were talking about YellowBoy being a late talker yesterday ...this next story fits perfectly here. Not only did he finally start talking, he hasn't stopped. The boy talks NON-STOP. Random question. Intricate descriptions. Long movie quotes. Extensive explanations of how things work that he learned about from watching Modern Marvels. His design ideas for his latest Lego Digital Designer project. (The boy can “auto-cad” like an experienced engineer. Kinda creepy-cool in a child prodigy sort of way.) And like any good hypochondriac, he describes his symptoms. Over and over and over and over again.
I've tried various methods of curtailing the complaining. I've given him “one full minute to list all your symptoms as fast as you can”. I've had him write them out on a notecard and hand them to me for future reference, to “save him” from having to repeat himself. And I've banned whining in my pretty room. But it was the YellowBoy himself who solved the problem. Elegantly. And for school credit.
During the fifth grade, kids at my boys' former school took keyboarding and learned to type quite well by the end of the year. Well, at least Jake did. Can't actually speak for the others. So since YellowBoy is in fifth, we've casually been working with him to improve his skills, while at the same time teaching him how to organize and save files, how to make the most of the word processor's features, and how to save to a USB drive to move files to a different computer. He catches on fast and isn't afraid to poke around and try to figure it out on his own. (By the way, that's my theory of why kids are so much better at electronics and technology: They aren't afraid to try. We, on the other hand, worry about screwing something up, so we don't try anything.)
So there we are, I've just gone in to wake him up for the day of school and am snuggling in his queen sized water bed with him.
“Mom, I feel like flip.”
“Oh, what's flip?”
“Allergies as usual, but not a bad allergy day. Just an average allergy day.”
“Ok, then what about a bad allergy day?”
“Flep. Cuz I just want to flep out."
I think he's onto something. If I can condense his complaining to one or two exactly chosen words, I won't have to listen to the whole, long recital.
“That's brilliant. Why don't you go write the definitions down for me, and then print it out and we'll put it on the fridge for us all to learn.”
And off he goes. I head to the store, knowing that he won't need me for his English lesson that day. When I get back, this is on the fridge. 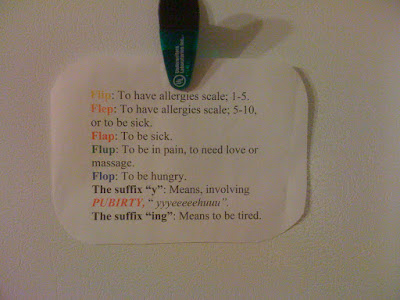 Not bad, eh? Pretty stinkin' clever, in fact, using suffixes to tweak the meaning. AND he figured out how to do the colors. And then put the file on the USB drive and took it to the computer that has the color printer. Not bad for a day's worth of “English”.
I'm happy to report that so far it's working.  That's a good thing, because while I'm not needing the “y” much these days, I am most definitely flapp-ing. Going to go take a nap....
AZ Challenge for the month of April.  Button in side-bar.


P.S  If you're new, and wondering why I call him YellowBoy, you can read about him here.
Posted by Tina at 12:55 PM

Sheer genius! You have a smart boy there.

ha that is so cool...and glad he gave you the key to his communication..smiles.

Looks like you are going to have your hands full!

This is wonderful a most interesting read, I enjoyed it from start to finish,


Thanks for calling by, hope you're feeling better.
Yvonne.

Hi, Tina,
So glad to have found you thru A to Z. I also had a second son who was non-verbal - at least in English - for the first three years of his life. We thought at first it was just that his older brother never gave him a word in edgewise. He didn't have to talk. Luckily, the school district was wonderful and diagnosed him with developmental apraxia, and then dispraxia as well. Lots of early intervention (LOTS)and work at home... and now he's an honor roll straight A Presidents Award kind of 7th grader. Still marches to his own beat - and, by the way, we found that music helps him organize his thoughts a LOT. He's been playing electric guitar since he was 8, in a band since he was 10. Helps him focus so so much, and feel connected.

It's so hard on us verbal moms when our kids have trouble communicating. It sounds like you do a fabulous job with your kids.

Wow :) He sounds like one of the most interesting people I've read about in a long time. Thanks for sharing :) I love the wordplay!

Wow. He's a clever lad. Thank you for sharing and I'm glad to have found your blog.

Following you from A-Z blogging challenge!

I'm very much enjoying your blog! I went back and read about Yellow Boy and Just Call Me Jake, as well as some other posts. I'm glad you're a part of the A to Z Challenge!

Very interesting!
:)
I'm a new follower from the a-z challenge. Nice to meet you!

Smart idea and great use of suffixes :)