I'm so excited! We do have some fun plans in place for the beginning of our summer, but this weekend we will take our first camping trip of the season! It comes at a very good time. I need some serenity right now, and my favorite place to get it is in nature, away from all the modern hassles, that though they make life convenient, don't make life necessarily peaceful.
We camp with our 1968 Forester camping trailer. It's 21' feet long, sleeps six, has a shower, toilet, and sink in the bathroom, and a three-burner stove with oven, and another sink in the kitchen section. We adore our camper. Originally, The Engineer and two of his hunting buddies bought it dirt cheap. I'm talking real dirt, it was a steal, accomplished by The Salesman, with cash in hand. Of the three of them, it was perfect that he did the negotiating. I don't think the The Rocket Scientist or my Engineer would even have dared to offer less than half of what they were asking. Which they promptly took.
The initial intent was to have a shell for them to duck into while hunting. None of the systems (electrical, plumbing, heat) were in good condition. Various repair scenarios were discussed, and the final decision was that if one of the families felt like putting time, money, and considerable effort into repairs, they would do so with no expectation of those expenses to be shared by the other two families. Can you feel the trouble brewing?
The Engineer and I both grew up camping. Hard-core tent camping. Rain, shine, sleet, hail, snow, we experienced them all. We had dreamed of being able to offer our boys that same childhood pleasure, and were prepared to do it in a tent. Which we did for the first seven years of parenthood. We hadn't seen it possible to afford a camper until it was almost time for them to go off to college, though. When given the chance to have a camper already, we were elated. We repaired.
The Engineer redid the plumbing, the electricity, the undercarriage (which we discovered was hanging on by a few nails, and had to be reinforced not to mention reconfigured to allow for the new grey water and black water tanks,) the ceiling, and he also put a bunk over the dining table to add sleeping for two more small campers, or one more large hunter. (The dining table collapses into a queen size bed, and sofa opposite the kitchen counter pulls out to make a full bed.)
That summer we camped a lot. One of the other families took it for one overnight trip. It went hunting. Words were exchanged about the camper. Let's just say that The Engineer's hunting buddies since that trip do not include The Rocket Scientist, nor The Salesman. We bought them out, and became sole owners of the treasure. Thankfully, their friendship has mended over the years, but it did take a while.
Come Friday morning, the boys and I will head to the hills, Rocky Mountain National Park's Moraine Park campground, to stake our claim on a spot. (No reservations are accepted until the season officially starts on May 25.) Once The Engineer gets off work, he'll hook up the camper to our new tow vehicle and come join us. Speaking of tow vehicle...up until this year, we've had to borrow the truck from Swissie. Though sturdy and reliable, our ancient Volvos don't have the towing capacity needed to pull this rig. We've been saving and hunting a good long while, and last fall, we found the perfect solution. We bought a used, 15 passenger van with removable bench seats. It's basically a full ton (or whatever they call it...) pick-up chassis with a van on top. And it's perfect. You see, it used to belong to the Colorado Department of Corrections. If you look on the doors, you can see the faint outline of where the sticker used to be. It goes well with the bullet hole in the oldest Volvo :-) 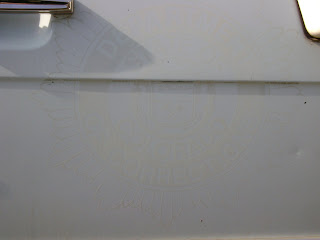 (Click on picture to enlarge)
AZ Challenge in April. Navigation in side-bar.
Posted by Tina at 1:34 PM

Wow. This sounds like so much fun! The camper sounds really cool.

have fun in a-z challenge.

Have fun! I love camping! Especially when it's not too hot, but not frigid either.

New follower from A-Z. Nice to meet you!

Sounds like fun. We have been doing lots of hiking, but no camping yet. It won't be long.
Enjoy.
Kat

How exciting! Now that our boys are older, we hope to take them camping. There was no way I was camping with diapers.

I hope it is some what warm where you are camping. It is still cold in Philadelphia. I never camped as a child so I wasn't too good at it the first few trys with my own kids. They all are avid campers now and sometimes I get to babysit when they want to go adult only. Have fun and enjoy your serenity.

I love to camp. We began as a family when Ben was one, in a borrowed tent. It was big and old and canvas and heavy!! Within a few months, we were given a tent by someone from church. It was BIGGER and old and canvas and HEAVY!!! It served us very well for 6 years, til Pete became ill and I had to pitch solo. Then we bought a lightweight nylon tent which we have been using ever since. I can't wait to get out camping again, but it won't be til after Ben's exams in May.

Wrote an essay and still forgot to say - Enjoy your weekend! :D