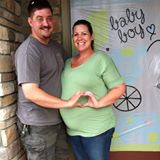 Yesterday I had the privilege of co-hosting GorgeousGirl's baby shower. For those of you not wanting to head up to the tab to translate all the nicknames: she's my cousin who moved to CO and lived with us for a while before she married The Marine. Their little one is due at the end of August. The party was a huge success. 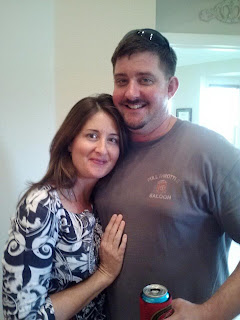 (The Marine and his sister) (One of my co-hostesses and her mother-in-law)

Swissie, The Master of Cakes, made this adorable one. Where she gets the patience, I don't know. 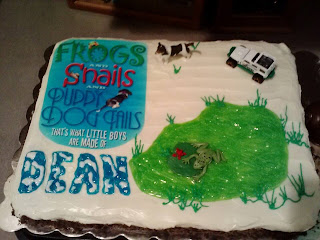 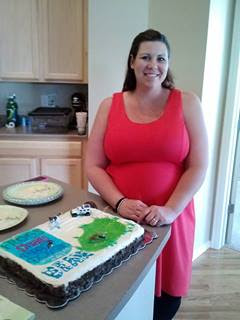 On the menu we had rolled up stuffed puff pastry in the shape of snails, baby weiners (puppy dog tails) and frogs in all sizes (gummy style). The guest of honor made this gorgeous bowl of jello with floating edibles, but you know me and my jello phobias, so I did not have any. Of course, for the health conscious Mama to be, we had loads of fruits and veggies. 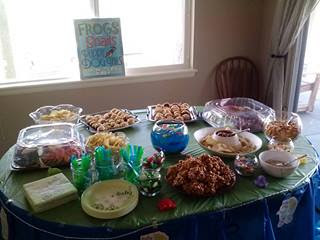 We drank wine out of baby bottles. 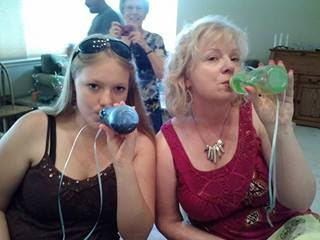 (My niece was NOT drinking wine...)


We decorated onesies with puffy paint. 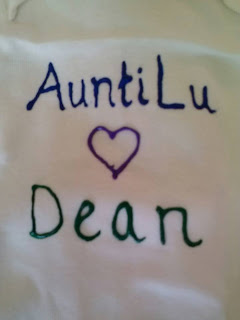 We tried to guess what was in the baby food jars.

The Engineer's favorite game (not that he attended the event, mind you, even though it was a co-ed shower) was the poopy diaper game. You might have heard of this one. Take a diaper and put a candy bar in it. Melt in microwave. It looks remarkably like real poo. Next, guess which candy the baby ate. Much hilarity ensued as one was allowed to taste if one dared...And some did! First prize was a bottle of wine, and not these little ones that my Swissie and I made as favors. That's great motivation... 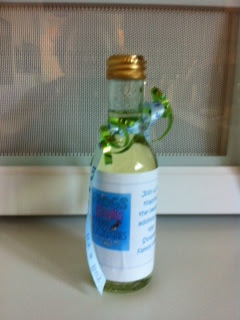 Aunt Risky gave this gift. The Marine rides motorcycles, and GG skies. He's going to be one well out-fitted dude! 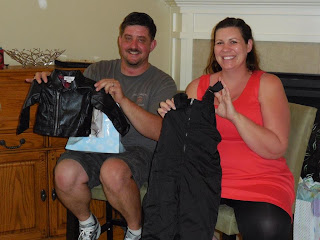 This quilt was made by GG's grandma, started over 60 years ago, and finally finished last year, on GG's due date. Think “the baby maker” from The Proposal – I think this will be a lucky quilt :-) 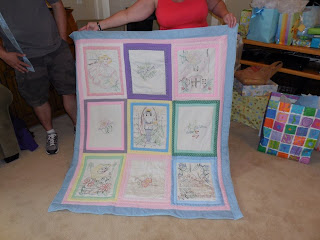 It's fun making people smile, and making memories, and being part of family traditions.  I'm glad I could be a part of this one.

Ever played the poo game?  If you're a parent, what was your favorite shower gift?  Would you sip wine from a baby bottle?

P.S And for those of you wondering, NO! I didn't have to go to the ER for a fourth Saturday in a row.  Phew.  Thanks to all my friends and relatives for staying out of trouble...

Glad no one was injured during the baby shower!
That diaper game sounds disgusting. I can still picture Billy Murray eating that candy bar in the pool in Caddyshack.

It all looks like fun but drinking out of the baby bottles is too funny.
Glad you had no ER visit this weekend!!

I don't do babyshowers and tend to just send a gift and when I do, I never play the games. It's to the point now where people know just to tell me about it and not burden me with an invite. LOL I did not go to my sister-in-law's baby shower because it was SuperBowl Sunday. I know, I'm terrible, but I sent a nice gift. :)

Sounds like you all had a great time and I love the look of the cake and that amazing quilt. Hugs for no ER visits.

baby shower games are disturbing...ha...sounds like fun times...love the little leather jacket...and maybe we will share a bday...mine is on the 22nd

Looks like loads of fun, glad everything is ok.

Glad you had an ER free weekend. And yes, I've played the poo game before. Quite funny. It looks like everyone had fun.

Hooray for a fun and successful weekend!

Sounds like a fun day all around. Glad there were no ER trips. And, nope, never done the poo game. Thankfully.

Looks like a fun time was had by all! And I'm lucky to have avoided both the poo game and changing diapers.

Looks like you all really got stuck in and enjoyed the making, baking, buying, sewing and drinking - and by the look of it the storms had abated ..

Have a more relaxing week .. with thoughts, but delight you had such a successful weekend .. Hilary

Sounds fun. Glad there were no more trips to Emerg.