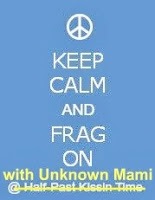 I'm joining a new Friday group called Friday Fragments, which are bits and pieces that are too short for their own post, but too good to never see the light of day. Link up at Unknown Mami (who is hosting for the summer instead of Half-Past Kissin' Time.)  I found this group through DoreenMcGettigan, an A-Zer.

Frag One:
I DON'T HAVE CANCER. I think that's worth shouting. All my biopsies came back negative. Two and a half weeks is a long time to contemplate one's fate. I have some other stuff to deal with that I won't bore you with, but they are going to be dealt with using some new meds that I hope will do the trick. I want to be back to life and leave these debilitating symptoms behind. But it's Friday, the weekend is ahead and I DON'T HAVE CANCER.

Frag Two:
My boys have been wonderful to me. I think they've been mighty worried, but they've gladly picked up the slack on chores and brought me stuff while I lay in bed, fighting the battle against my rebellious digestive system.

Frag Three:
The Transporter is becoming quite the mechanic. His first car, a vintage 1991 Volvo 240, standard transmission, red, needs a lot of love. What do you expect for a car whose new tires alone are worth what we paid for it? He fixed it. It wouldn't start when we bought it (yes, I know that's crazy, but if you have The Engineer, who has worked on Volvos for 20 years, and The Swede, who worked FOR Volvo and ON Volvos his entire adult life, then there's some knowledge floating around and so far there hasn't been anything they haven't been able to fix on our “fleet”) Red now starts, and The Transporter grinned at the compliment about "becoming quite the mechanic" from his Morfar (that would be The Swede – mother's father).

He won't own this car until he earns those last three contracted A's, but having it sitting in the driveway, ready to go, is what I think will be the final motivation to get him moving academically.

Meanwhile, we celebrate that we don't live in a covenanted community. I know just what they'd say about our four old Volvos, our ginormous van, and our camper, all parked on our property...

Cancer free - shout that from the mountaintops!!! Amen.
Make him earn the car - good for you. He'll appreciate it more.

cancer free...those were the only frag i needed today...that is good thing...hey way to motivate those A's too...

frag four... cancer free!
you are the best and this you know...

WHOO HOO on being cancer free!!!!!!! I used to get Wacky Packs for earning As on my report card. My how times have changed. lol

WHOO HOO on being cancer free!!!!!!! I used to get Wacky Packs for earning As on my report card. My how times have changed. lol

Are you sure this Friday Fragment thing isn't about writing in sentence fragments? Which I tried to do, but, man, that's harder than it sounds.

No cancer is good.

SO glad to hear your good news Tina, it must be such a relief. Definitely worthy of celebration and sharing.

It must be such a relief to get negative results, I'm so happy for you.

Awesome news!! I know how hard the wait can be when you are waiting to know big huge news like cancer vs no cancer. Enjoy your weekend with this huge relief!

Hurray for being cancer free!

Four old Volvos! Even in Jâmtland it's difficult to find someone with such a collection >:)

Oh, my gosh, shouting HURRAH!!!! Enjoy your weekend and boy I so wish we had all those mechanics :) And, I am sure he will get those A's soon!

Found you thanks to Jo passing the Super Blogger Award along to you. Saw your shout about being cancer free. Absolutely worth shouting about! Hopefully the actual culprit will be easier to vanquish--and perhaps a little less frightening.

Tina, I am so pleased for you, must have been a hard few weeks waiting. Cannot imagine it. Hope all the rest of the problems get sorted out soon, I'm rooting for you.

That first frag is cause for celebration. I know, all to well, the anxiety of waiting for test results. I'm relieved and happy to know this.

I'm encouraged you have your boys and a family support system. That is vital.

I tried to make my son earn his car, do everything properly. Then against my will, my common sense, my ex and her husband took him to buy a car illegally. What happened next involved a nasty scene and the police. He hasn't driven since and that was six years ago. Wishing all well and your sensible attitude is admired.

What a relief it must be that you don't have cancer! Hooray for that! And welcome to Friday Frags. I discovered it pretty recently too, and love it! Hope you have a great weekend!

YAY! that is GREAT news!

Wonderful the boys have been helping out more than usual .. that's good news ..

He great the Transporter is taking after his Dad and Grandad ...

Keep happy in this heat .. and let's hope those meds do the trick - positive thinking .. and now you have one less thing/dreaded disease to worry about ..

Yay, yay, yay! Hopefully the relief of being cancer-free will even help some of your GI stress! :)

Wait, so these were TRUE? I thought at first they were fiction fragments. But then I saw all the comments, so: AWESOME FOR YOU. I'm new to your blog so I didn't know you even were worried about cancer but it's great that the first news I hear of your health is good news. I hope things keep looking up for you.

And you've got a kid that can work on cars? Good for you. My own kids are sort of like antimatter for cars. And for their rooms. And for work. In fact, want to trade? NO I AM JUST KIDDING, I love my kids. (CALL ME BACK LATER.)

That's WONDERFUL news you do not have cancer! What a relief that must be. I'm so happy for you--it's such a hassle to deal with!

Thankful with you that you don't have cancer. I have had a few scares that all turned out benign and it's such a relief!

So I'm wondering......who do you speak Swedish to? I speak fluent pig Latin! :). When my granddaughter was little it confused her....she's fluent in Spanish.....so she can confuse me right back!

Frag #1 is my favorite. Doing a happy dance for you.

Hi Tina. Thanks for stopping by my blog. I think it's great you joined FF and look forward to getting to you know you better. #1 is FANTASTIC #2 You raised your boys well. =)