I've written three posts for today. All whiny drivel. I decided to go back to my photo album for inspiration for something to write about that wasn't depressing, medical, or would cause you all to call the men in little white coats to come get me.

It's time you learned Backyard Fence Ball. This is the game you and your siblings invent when you all want to play baseball, only there are only 3, not 18 of you. 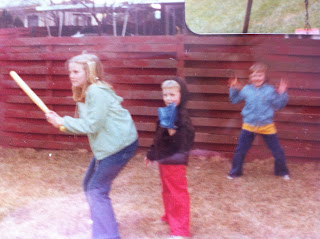 Teams:
Each person is his or her own team. When you're up to bat, you hit the ball, run to first. Get there safely? Go hit again.  Get to first safely again? You are now figuratively on second. Hit again? Get to second? You're home! Simple arithmetic. You get around the bases on singles, doubles, and triples, and each play is added to the one before. Still three outs.

Outs
The other two players are BOTH trying to get you out. One pitches, the other fields, as does the pitcher once the ball is away. To get someone out, you just have to hit THE BASE, or hit the person.  First base was the fence you see in the back ground. We were fairly reasonable about what was close enough to first base, although this is the point we argued the most. We should have just drawn a circle in chalk and called it done. We did like to fight though...Second base was the big tree. Anywhere on the trunk was fine. Third was a lawn chair. Again, anywhere was fine. Home was a home plate. Well, a circle drawn in the dirt.

We played this game for hours. When we lost our wiffle ball (um, yeah, I never said it was a real baseball) (but a wiffle ball does sting if thrown by DataBoy) we'd play a kickball version of it. Yes, I did get over my kickball trauma. Eventually. DataBoy usually won because he had three skills that us girls didn't possess many of: hitting the ball, throwing the ball accurately, and catching the ball. Sigh. It was fun though.

~Tina, challenging you to quote the movie
Posted by Tina at 1:02 PM

I'm sorry you felt the need to write whiny posts, obviously things not going that well, so wishing you all the best.

ah i hope this cheered you up a bit..sorry if its a whiny day...you got me thinking about the fun games we used to play...midnight in the graveyard probably my fav...like reverse hide and seek...the its go hide and you have to go find and beat them back to base....

We mostly skipped baseball-type games when I was a kid. I don't really know why. We did play kickball, which is a baseball type game, but it's also not. We had all sorts of complicated rules depending upon where we were playing; they all had to do with automatic outs, like, if you got the ball stuck in a tree when you kicked it, you were out. If you kicked the ball through someone's window (never happened, but we had a rule for it), you were out. And everyone would run (I'm not sure if that was an official rule or not). Sometimes we played with a basketball just to handicap the kicker.

Hit the person? As in, with the ball? You guys were vicious.

I was so incredibly not athletic and a klutz and didn't know a thing about sports when I was a kid. I got left out a lot and made to feel like a loser....and not just in gym class.

I never heard the quote before today. I was just doing some history stuff online, ignoring the TV, until I happened to hear a certain quote... I love ironic things.

Hi Tina .. the brother below me and I were good ball players .. so we could play tennis as a family - that left the little one out - such was life he wasn't so sport oriented.

But we'd always played French cricket or some form of ball game as kids - rounders ... etc etc - fun times just being able to play for hours and hours ...

Love the photo - and of course learning a 'new' sport now you were in a different country .. still can't quite get my head round baseball!!

Hope you're having an easier weekend .. it's gorgeous here - at last .. cheers and hugs - Hilary

all we need is love, said by john lennon... sadly shot down by a crazed fan... who lost the meaning.

I'm sorry to hear you are feeling whiney!
I will be in your neck of the woods for a couple hours today, seeing my aunt and cousin, and visiting the Brainfood Bookstore, which is selling my book! I will send some short-distance love your way while we are there.
BTW we still need to hang out...

We used to make up our own ball games, too. And I was once guilty of breaking a neighbor's window with a great hit.

This reminds me of a game we used to play called French cricket. It required a tennis racquet and about 3 players.

Wow: your method of counting runs/bases beats ours, maybe, in that we used an "invisible runner," who would advance as many bases as we did. But I'm glad to see that we weren't the only people to play "hit the runner and he's out," a method that had to be replaced by "pitcher's hand out" once we got strong enough to hurt with the ball.

Now I want to get my kids and go outside and play whiffle ball. Only we always end up just spraying each other with the hose.

Kids are so creative!

I don't know where the quote originates, but I used to use it all the time to explain to my friends the frustration I have with cricket. As I don't think there have been any films about cricket (how boring would that be!!) I have no idea :-)

Oh, I loved this story. My cousins and I would make up games all the time,off of originals, then we would be alright for awhile until something would go wrong and then eventually some kind of fight broke out then off to a new game or an added rule until we forgot half the rules lol