I've mentioned over and over again that The Engineer is into projects, so I thought I'd show you the latest.

Aquaponics is the combination of cultivating fish for food and using the fish water as fertilizer for the plants you grow, instead of the rather expensive liquid fertilizer you use for hydroponics, which is the same as aquaponics, but no fish involved. You can spend a lot of time on YouTube watching the lovable nerds explain it to death. My nerd sure has – but it's helped him design a really great system.

The fish are tilapia and live in a pond in the basement that The Engineer made of a wooden frame and fish pond liner. Our breeding colony has seven members, and are just about old enough to breed. (They are our second colony – the first produced over 200 fish before slowing down “production” at which point they became The Swede's birthday stew. Yummy!) We did take a break and stop heating the water to halt breeding so we could catch up with storage space for the offspring.

Think of it like the nursery rooms at church. You have the infant nursery with the tiny little nemos who will be eaten by their parents (yeah, I know, but they're not the only animals which eat their young...) if not separated. Then you need a toddler room, because soon those toddlers of the previous generation start fighting with the new nemos. Repeat the breeding, and soon those toddlers need the 4s and 5s room. We didn't have one. So it was good to have no new babies while we caught up and found cheap 55 gallon tanks on craigslist and now we have happy babies of all ages, growing quickly.

So how does the fish water in our basement cellar get outside to the growing veggies? Swimming pool pump and some complicated tubes and siphons and engineering stuff like that. Here, let me show you. I can explain better with pictures... 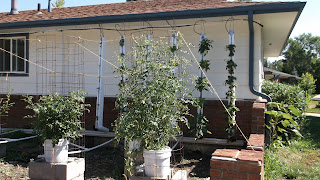 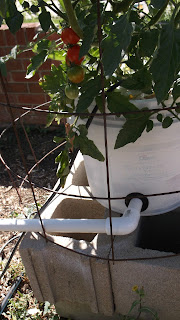 This is the majority of the garden.  We have the vertical hanging towers, and then the five gallon buckets growing the larger plants, mostly tomatoes.  Water comes to the bucket through the black hose you see on the ground, which has those tiny black tubes attached - the fish water sypons into the bucket, keeping the growth material wet.  Water leaves the bucket through the white pipes, and as you can see in the bigger picture, those white tubes lead down to a trough where the water runs back down into the fish tanks again.  This is what controls it all. 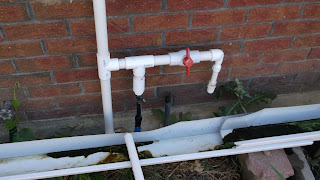 That and an arduino which The Transporter programmed.  The pump runs 3 minutes on, 6 minutes off.  (The pump is in the basement.) 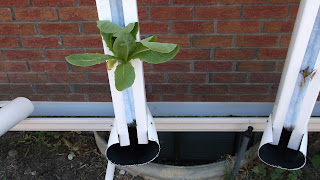 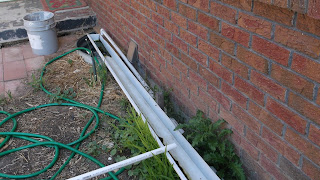 The trough, showing how the towers are attached (so that wind doesn't make them drip water in the wrong place) and then it disappearing through the window well (through pipes) back to the beginning.

OK, I can tell most of you're just yawning from all the nerdy explanation, but maybe some of my nerdy (aka wonderful) friends wanted to know all that. How about some pretty pictures of our wonderful crop? 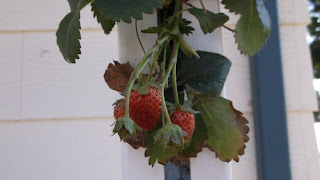 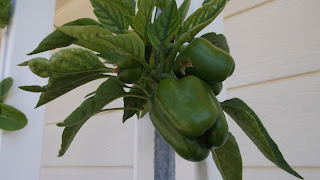 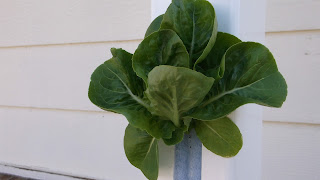 Strawberries, bell peppers, and bib lettuce!  Those are all growing from the towers. 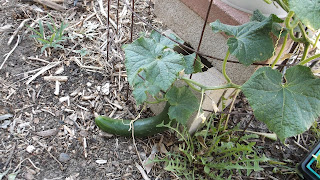 This English cucumber's vine starts in one of the buckets.

Do you have a garden?  What do you grow?  Are you married to a mad scientist with fish in your basement anda weird garden in your front yard?
~Tina
Posted by Tina at 12:00 AM

Sounds complicated but your veggies seem to be doing better than ours at the moment! Except the strawberries we seem to have loads of them. Yummy!

PS I left you a little award on my blog today if you are interested. Have a great weekend.

I been playing with aquaponics this year to see how it works. So far-no fuss, no muss although I have a difficult time thinking of it on a large scale.

I was amazed and intrigued by it all. I do not have a green thumb and I love reading all about others. I have attempted many times and probably will attempt again. I read and get ideas and try and then my husband lovingly teases me about how I fail but hey, I try :)

huh that is rather fascinating actually...and it is making for a better crop? bet it was serious fun for him to figure out...ha

At what age will the fish be big enough to eat? I assume you intend to eat them eventually. I'd want some protein as well as the fruit and veg. Very complicated system, but if it works.....

That is truly fascinating, an impressive that you have it going on at your house!

You and The Engineer can do all this?

I frequently worry -- I really do-- that after the apocalypse my only role in society will be "monster bait," the guy they tie to the post to lure the monsters out so they can kill them from the cave/tree fort they've built.

(Yes, post-apocalyptic life will be awesome [tree forts!] and brutal [you tied me to a stake as monster bait!])

That's because I have no skills that are actually USEFUL in society. For example, I yesterday came up with an idea for a children's book called "1-2 Gorilla." This is not useful if you have to feed yourself.

But you and The Engineer can do all this? Raise fish, use the water to fertilize plants that grow in towers? This is honestly AMAZING. I am so impressed with this.

In answer to your question: yes, we have a garden. It is a pot of plants that Mr Bunches and I put together earlier this year, called "Mr Bunches' Traveling Salvation Garden," and it nearly died when we forgot to water it for a week.

(See? Monster Bait. That should be on my business card when the apocalypse comes. Also: we'll still have business cards, post-apocalypse.)

that's brilliant! No, I don't have a garden. I despise the outside and gardening. I always say if you want to kill a plant just give it to me. I'll kill it good. Nothing I've planted ever lived except a sequoia tree and some potted ivy.

That is amazing.
No garden or fish ponds for us. When would I have time?
The plants growing in the tower is really cool though.

Our garden is mostly tomatoes. I want to have some peas, too, but I haven't worked out how to keep them from getting overtaken by the tomatoes, so, again this year, we got about half a dozen peas, and that looks like it. We do have some beets and onions planted, too, but those are mostly a token thing.

Hi Tina .. gosh I'd love an aquaponics set up .. or even a hydroponics set up .. and I think I'd rather like being married to an engineer - as long as he did things! Yours does I know ..

Sounds a great contraption .. but great plants a-growing ... and keeps the master happy! The mistress gets to eat the food and enjoy fresh veggie ..

Did you really make the fish into fish stew??

that is so cool! like the "living with the land" ride at epcot in disney! awesome!!

An elaborate set up, me thinks. Tanks for this and I'm feeling rather drained.

I have a garden full of strange flowers and wee folks :)

Have a peaceful weekend.

What an incredible setup. We don't even have a garden because I tend to kill everything that the bugs don't devour.

this is pretty cool! thanks for sharing. :]

This is awesome. I would never try it myself, but I would admire the Engineer and you from a distance. Those veggies are gorgeous!