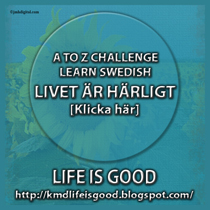 We've come a long way together, beginning to zenit, if you will.  It means zenith, but I have NO idea how to pronounce it, since I've never used it in conversation, and my proofreader is unreachable at this hour.


Besides, I want to spend our last lesson for the semester on some more useful words. After all, it wouldn't be very worthwhile to spend a month learning random words of a language if all you can do at the end is order a beer. (Not knocking how useful a beer can be...)

One reader, faithful Laurita (please pay her a visit and show some love) who hasn't missed a post of mine in April, commented that she needed to know how to say, “He'll have a beer!” since she didn't want one.  I'm referring to my W post where I also cheated and didn't do a Swedish (practically non-existant) W word. I taught you to order beer.

What you learned was “Jag vill ha en öl”
If he wants one and you don't, you say “Han vill ha en öl” where han is like “hon” as in honey, sweetie, munchkin...

No beer drinkers in your party?
Maybe someone wants wine? “Jag vill ha vin” where vin is pronounced veen as in seen, as in I've already seen that movie.

If you need a martini (I could go for one right now)or a Tom Collins, or a gin and tonic, then you'll just have to point and gesture. I've only been to one Swedish bar (as I talked about in my Ovanligt post) and I drank beer).

So out there on the town, enjoying your beverage of choice, perhaps you need to use the facilities.
“Var finns toaletten?”
var: like car
finns: fins, like on a fish
toaletten: tow + ah + let + en (as in end)

I will warn you though. There are I think four other words for restroom facilities, and I don't know what modern Swedes say. It's like “powder room” in English. I don't find myself asking for that at Chili's. I just want the restroom.

Affair = store, pronounced just like in adultery
restaurang = I bet you know this one. Just like in English, except the end is rung (as in steps on a ladder)

I hope that you've had fun with these lessons, and that maybe you retain a word or two to dazzle (*snort*) your friends with. For me, it's been a lovely return to childhood memories. Thanks for taking the ride with me. It's been an honor.

If I haven't been to your place yet, no worries, I'm going to keep visiting and responding to comments until I'm done.  You'll hear more about the Post-Challenge Challenge (where we keep visiting the list even though April is done) very soon.


I'm also having a give away.  I'm going to number your comments from A to Z, then have a drawing for a winner.  Prize?  Gift certificate to IKEA.  I'm doing that after the reflections posts are up, so you still have time to go back and read the ones you missed.  Obviously, the more lessons you've taken, the better your chances.

Cool! You not only answered my question, but now I know how to order wine, which would be my drink of choice. I'll have to book a trip to Sweden now so I can use some of these words. :)

I enjoyed your posts so much this month. Tack så mycket. :)

A short translation: Thank you for sharing your sweet childhood memories. I have laughed and cried a lot while reading your blog in April. Oh dear, I'm tearing up again.

saying affair after a few beers might get you into more trouble than going to the store is worth...you know...smiles...this has been fun tina

Don't think I'll need a drink this early in the morning - I'd be asleep by noon! Had fun learning the new words, Tina.

Just stopping by to thank you for hosting the A to Z Challenge. It's been a great journey and learning experience for me as it gave me a change to look back on my life in Sweden. Thank you so much.

These posts have been so awesome. Congrats on making it all the way through, Tina!

I have learned so much from your posts!! They were all so interesting and fun to read.

Hello, Tina! Congrats to you and the entire hosting team!!! You all did an awesome job. It's been another super fun Blogging Challenge!

Have a wonderful week and happy A to Z!!

This has been amazing, Tina! Keep up the good work, you write very well, and teach extremely well! ":)

After all that beer, wine and other beverages ordered we really do need to learn how to ask where the bathroom facilities are.
Thanks for being a great team leader, Tina, it's been a lot of fun this month.

Congrats on completing the A to Z challenge!
-MJ http://creativelyspiltink.blogspot.com/

lol Well restaurant is a good word to know, too. You will need to eat before all that beer.

Yea, now we can order drinks for the whole family, or party...VERY IMPORTANT :) I have fallen off the wagon with writing you a comment in Swedish but I will keep trying. You have done a great job in teaching some very practical words

Ikea? Very appropriate. I can't speak Swedish yet, but when I'm ready to go to Sweden I'll come back to review this series.
Great job Tina!

Nice job, Tina. I not only enjoyed learning the words, but your writing was entertaining as well!
Congratulations on a job well done...oh, wait...am I supposed to know how to say that...

A to Z Challeng was brilliant. Congrats on making it to the end.

Congratulations! You did it and you did it with style. I read most of them but rarely stopped to comment. One thing's for sure. You have finally found how to make brevity work extremely well. (I know this was your own personal challenge and I bow to your accomplishment.)

my favorite words from other languages are the ones that match English.
Affair! ah yes, but what does it mean?
:-)