Today's word is one that believe you'll find useful. Or at least interesting. I thought that we'd work on some contrasts today, contrasts between the Swedish culture and our American culture. As a child of both cultures, I'm grateful that unlike Spock, I didn't have to choose one and forever leave the other behind. I've got the blessing of knowing at least two different ways of doing many things. You've read about family traditions, about holiday celebrations, but that's not what I'm referring to today. Today is about everyday life. About what's different between Sweden and the US. What is ovanligt.

Pronounciation:
owe-vaughn-lit as in “I need to repay Vince for the lighter he just let me borrow.”

Definition? Unusual, in contrast to what is regular. I'm going to just do bullet points, otherwise you'd have me going for a long time. It's fun to do that. I've done that. I met up with a childhood friend during my 1996 trip “home” and she and her boyfriend and another friend of theirs took me out on the town. We ended up at a bar which had a street-side seating area. It was late, and the last bus home to my Farmor's apartment left at midnight, but it was a night to remember. It didn't get dark, so that was ovanligt from what I'm used to. Our conversation consisted entirely of the differences between what we do in America and what they do in Sweden.

 It's ovanligt in Sweden:

 for people to move from town to town as they grow up and then later as they get jobs. Most plant themselves where they are, dig their roots down deep, and stay.

 for families to own more than one car, if they have a car. Public transportation is amazingly well organized and easy to use, and very cheap. 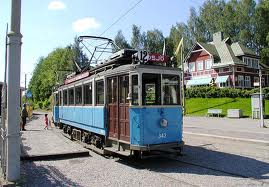  to eat out as much as we do. They have their share of restaurants, of course, but they tend to be high-end priced, or inexpensive sidewalk cafes and sandwich bars which can be found all over the place. There's not a lot of middle ground places, or chain restaurants, as we have here.

 bring a school lunch. Everyone eats lunch in the cafeteria. For free. We had fish twice a week, and once every three weeks we had my favorite – rice pudding.

 to get married before living together. In a very large percentage of families, the parents never marry. I don't know why, or what the tax implications there are, but this is confirmed by The Swede, so it must be true ;-)

And now I'm leaving you. Just found out that my baby brother and his wife just had their first child! Too much excitement for me to concentrate on writing!

To those of you who read this and are Swedish, PLEASE correct anything that I got wrong. These points are from my memory, my perceptions and observations, and could very well be wrong by now. Don't hesitate to say so.

That's so interesting. And I love that word, it's so fun to say.

Also, Congrats! How do you say Aunt in Swedish?

The part about people staying close to where they are from all their lives, is like a lot of parts of Europe (not UK), and also only owning one car. The unmarried bit would be quite different or ovanligt, though.
Exciting news about your brother's baby - congratulations!

I think it's nice that people in Sweden put down deep roots, in comparison to the U.S.'s transient way of life. And I would love to not own cars as a necessity.

Congratulations to your brother!
Some area of the US sport families who stay in the same area, like where I live in the south. I grew up moving around though.

This was fascinating. I'm loving learning about Swedish culture. That you move seamlessly between the two is amazing.

Congrats on the new little life in your family.

Been thinking about your son since you posted about his arm. How did the visit go? Did he need surgery or just a cast? And so many more questions...

interesting on the not marrying...and there are days i wish our public transportation was well enough to keep me out of the car...smiles...cool word...now about that lighter...smiles.

Having two cultures to draw on is wonderful. It expands our awareness of our world and opens up so many more options about how to think about things.

Congrats on the new baby in your family.

I love this word - wish I knew if I was pronouncing it correctly when I say it!

I saw a Danish film this year and the most surprising thing was hearing the Danish people "talking smack" about Swedes. I tend to think racism and hatred is "only an American" thing. My friends and I all asked each other, "Did you hear that line?"

I thought this was more of an ovanligt situation. :~)

Thanks for all you do!

Julie Jordan Scott
Fellow A to Z Challenge Writer
twitter: @juliejordanscot
O is for Octavia
On a Mission to Spread Word-Love Throughout the World

Congrats Auntie! Not marrying, who knew that? It's so cool being bi-cultural.

i am learning so much from your wonderful blog!

Beautiful, congrats on the new baby! Setting down roots deeply in one area is a good thing. Too bad North Americans don't seem to do that now.
Great post!

I've never come across the word before it sounds delightful. Thanks for this great post :)

Fish twice a week sounds very healthy. I wouldn't mind having fish twice a week. But I hope it wasn't something nasty like fish sticks like we used to get in the school cafeteria. No, I wouldn't think so in Sweden.


Lee
A Few Words
An A to Z Co-host blog

Hey Tina,
Please forgive me for not commenting on your previous posting. You know, I've got an oven light, actually, I've got two. Yep, I've got a double oven.
Anyway, I skimmed through, sorry, thoroughly read your article :) Congrats to your brother and his wife on the happy news. I hope your son is okay.
Must go now and see if anybody has bothered to comment on the latest posting on my site. Probably will because it was written by our Jack Russell dog :)

O was a hard one and this was one of the most interesting I've come across! Mine was for Oh.