This prompt is from Jake. He said, “Write about my Rubik's cube obsession.”
It amazes me how the old is new again. As in toys that I played with as a kid, or bands that I know from my high school days. These are now appealing to my son. “I heard this great band called Journey.” Ha! I remember necking with my boyfriend while they played in the background. (Hoping that's not what he's doing while listening...after all, he's 13 and I was 17. Not that I'm gonna let him date or anything. He's too young!)(And I'm afraid I'll still be thinking that even when he is old enough to do so.) But I'm not supposed to be writing about music. This is about the Rubik's cubes new popularity.


When I was in high school, the smartest kid in the school was Paul Hunt. (Not to be confused with the other Paul from Musical Memories. He was actually not that smart at all...just gorgeous eye candy.) Paul Hunt was in my trig class when he was eleven. And smarter than all of us. (The class had mostly upper-class-men, but I was was way ahead in math, taking it as an ninth grader, attending this class at the high school, then catching a bus back to my junior high.) (And yea, he stole my thunder when he arrived...grrr) There was no denying his genius, though, when he solved the Rubik's cube, without any directions.


Many of us had one, and would race to see who could complete a side first. And then we learned how to do two layers, stumbling upon the method by trial and error. But he was the only one who could solve it all the way. He was a generous person, though, and taught the rest of us normal, non-freakin'-genius folks how to do so ourselves. Not that I remember the algorithm now, mind you. I'm sure this aggravates Jake, who is obsessively trying to figure out.
I don't know what first got him going again, digging the garage sale cube out of his drawer to play with. Then searching You Tube for solutions. Then declaring the old, small cube inferior and asking to be driven to Walmart for a new one. Took us two Walmarts to find one, but he's now the proud owner of a standard size cube. Which came with directions! I don't remember mine coming with any directions...but my memory ain't what it used to be. 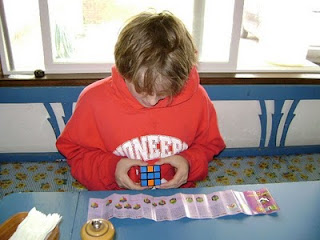 So here he is, practicing, figuring out how to translate the cryptic instructions into useable information. He sits for hours. (Wish he'd spent as much time on his last history chapter, but what can you do...summer was beckoning, and he wanted to be DONE.)


It won't be long before he's got this thing solved. Then he'll be onto some new obsession, and it just might be something else from my childhood. It's fun watching him find interests, and explore them, especially when they mirror mine. I'm proud that he loves reading, and writing, and guitar, and puzzles. It gives us many points of connection to each other. And that's something I treasure. Not all moms get to be this close to their teen boy.
Posted by Tina at 10:14 AM

LOL! My son is suddenly into Rubik's, too! I couldn't believe I was rebuying my childhood for my son. I snuck into Target to buy him one for a surprise. And I totally agree with you -- they did NOT come with a cheat sheet. So far, I have guilted my son into not looking at it. Wonder how long he can hold out.

I remember playing "Just Like Starting Over" for my parents (on the hi-fi, oy!) and explaining that his name was John Lennon and he was new. LOLOL!

Oh fun! My husband still has his from when he was a child!

I never could figure the darn thing out! It drove me insane ( that's why I'm the way I am today! ).

oh i spent hours on my rubik's cube...and if you try and change the stickers you will never get it back again. i was just playing with one of these at a clients house th other day...

The Rubik's cube was the biggest thing to do when I was in school. Though, mine didn't come with any instructions. We tried solving it in the School Bus. I often got a couple of sides right, but never the entire puzzle!

Jake is developing some excellent skills - logic, strategy, perseverance....things that will help him in many ways in the years to come.

I could never master that cube!

I always thought Rubik's cubes were a hoax...and unsolvable. Darn! You mean they're not?