My house is riddled with bullets. Bullets with black tips, bullets with suction cups tips. Bullets that whistle, bullets that land with a thud. Even a rocket, that leaves it's launcher with a sonic “wha-thoop”, giving warning of its imminent arrival at its target. My boys are building an arsenal. A nerf arsenal.

I don't know what the first weapon was, probably the sharp-shooters sniper rifle. It can be converted into three other configurations, including an easily hidden pistol. Stealthier that way, especially desirable during all-out warfare. Which happens around here a LOT. Of course some of the neighbor boys have their own weapons, but no one can match YellowBoy's stash. He has seven weapons of mass destruction to Jake's five. This means we can arm an entire team of gunmen. And we do. 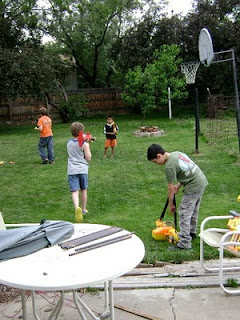 We live on a semi-circular street, only two blocks long. It's not a through street to anywhere, so there's only the traffic of the residents to worry about. In these two blocks live seven boys of varying ages. They all usually end up at our house. Don't really know why that happens, but we've been THAT house since the beginning. Maybe it's the tree house, maybe it's the easily absconded with pop in the garage. Whatever the reason, I'm actually glad. I know my boys' friends very well, and I don't have to worry about whether the other mom is supervising them well enough. I'm doing it myself. I do run out of snacks more quickly, and in the summer just try finding an otter pop. You won't. But you will find the empty, sticky tubes all over the place. Of course it isn't my children who don't throw them away properly (as if) but it sure is they who pick them up. Not very gladly, but they do eventually comply. The threat of no friends is an effective one.

It's quite the sight when the collective decides that nerf is on the agenda. They change the rules of engagement from time to time, so sometimes it's not pretend warfare anymore. Someone's upset about the rules (and not knowing that they'd changed since the last battle) and is shooting the others for real. With lots of shouting. When the weather doesn't permit outdoor warfare, they play a game of stakeout, using the kitchen, and then the basement. Shooting bullets up and down those stairs at each other.

I have no idea how they keep track of whose bullets are whose, but usually everyone goes home with what they brought. There is bullet attrition though. They do TRY to pick them all up, but as I described in the opening, they end up all over the place. When I find one, I usually just toss it into YellowBoy's room for him to pick up. After all, they can't expect ME to know which gun takes which style bullet. They're interchangeable, but heave forbid I put the glow-in-the-dark bullets into the wrong gun. It's a crime of high proportion, and I'll probably get myself shot.

I do understand why this is all so much fun. Have you ever tried the Vulcan, which is a machine gun? It can shoot 30 bullets in one load, in very rapid succession. It's very stress relieving to just pick that thing up and unload it on an unsuspecting child. All's fair, because of course they enjoy surprising me with a volley from time to time. So if you come to my house, and are stressed out, I will lend you that Vulcan and you can unload. I'll leave you with this shot: my friend, playing stake-out with the kids. And feeling a lot better afterwards.

I'm coming. I need the Vulcan today. And I love that you are the kool-aid house on the block! Hooray for you!

ha. we love our nerf guns! we play hide and seek with them...and you have to clear the house of bad guys. the vulcan is a beast...until you have to reload with bullets still flying around you...lol.

I need to get myself the Vulcan! Too much stress needing to be relieved!

Isn't it great to be THAT house! I loved knowing my kids friends!! Not all that familiar with Nerf guns but sounds interesting!

I bought the nerf skeet shooter for myself because I felt the need to shoot stuff! I would LOVE the Vulcan!!! Wow!

Be glad they don't all have paint ball guns. We were never the same after my son and his friends got those. :)

Have you tried the marshmallow shooters? Those are fun, too!