Jake at the Wheel

Today's post is brought to you by YellowBoy's prompt. But first, there's something I gotta show you. 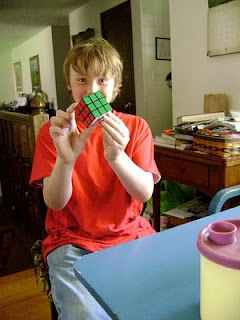 Yup, he did it! And has been doing it over and over...if you want the whole story, check out Rubik's Magic Appeal.
So at first YellowBoy said, “Write about my special blankies.” But then when I was loading the picture of the solved cube, he saw the pictures from yesterday afternoon when Jake drove a car for the first time. Now he wants me to write about that. And yes, Jake is still 13, so that's why his driving a car is newsworthy.
When I was growing up, my Dad, my careful, by-the-book Dad, also let us drive young. You see, the drive-way of the Briarpatch is about a quarter mile long, and winds around the edge of the property.

(Can't really see it in this shot, but I just found this picture and wanted to share.) We three kids would fight about whose turn it was to drive in. When we were younger, we sat in Dad's lap and his hands were still on the wheel. As we got older and more capable, we'd still be in his lap, but only our own hands were on the wheel. By the time we got too big to sit in his lap anymore, he let us totally take over. It was exhilarating! And we did get plenty of practice, because as I told you before, we went there just about every weekend in the summer, and as often as possible during the other seasons, when a group wasn't there.
So yesterday The Engineer was installing his new clutch cable, and needed my car moved. It struck me that Jake would probably love to do it, so I convinced The Engineer, who talked him through it. I've never seen such a grin of delight on my son's face as when was behind that wheel. This was of course a total whim on my part, and not something he had even considered asking for the privilege of. I bet that was part of the joy, too. Check him out! 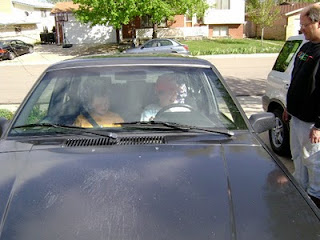 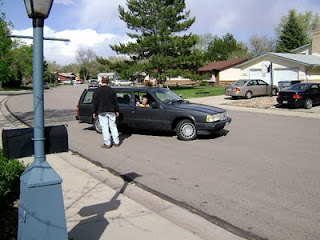 He didn't exactly park it right the first time... 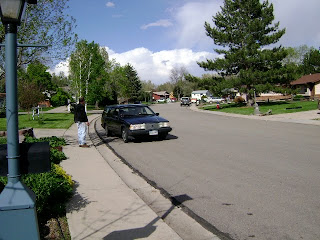 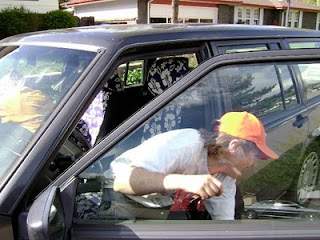 But he did it!
And his first words were, "And now for the bragging!  Gotta text everyone!"  And I probably would have too, back then.  If I'd had a cell phone...
Posted by Tina at 10:40 AM

you know that probably made his day...so cool on teh rubiks cube too..!!!

what a delight that must have been. we let Bethany drive to and from the bath house while we were camping this past weekend. She has a learners permit and is suppose to only drive with a licensed guardian. anyway...she was in heaven.

I didn't get to drive until 19, so your son must be so happy to do just that. Great job, he did!

I can just imagine that grin of delight!!

That had to have been a thrill for him and happy moment for you!