Have you ever been a runner? I never thought that I'd join this elite group of athletes. After all, I couldn't make it around the track without huffing and puffing for those mandatory fitness tests. But I was a gymnast, and I considered myself in pretty good shape. Why then couldn't I run? I was heart-broken when my orthopedic surgeon (What? You don't have your own?) told me that my gymnastics days needed to be over. (Just because you break three bones in one year doesn't necessarily mean that you shouldn't be involved in this sport. Ok, probably. )
He did say that running was ok. Which I appreciated. After all, Dr. Schribner had brought me through a broken hip, with pins and all, and a body cast for four months, and then the “lesser” injuries of ankle, collarbone, and wrist. I figured I ought to listen to him.
You've got to understand that running at our high school was an elite thing. We always placed well at state, and there was the dynasty of the Kinnecome girls. I had the privilege of being invited into their inner circle. That didn't happen at once, of course. It took a lot of hard work and mental strength to get there. But it was a glorious ride.
I remember watching the cross country team practice as I suffered through marching band practice. (Remember, our band was horrid at marching.) But they looked like they were actually having  fun together. I wanted to be part of that. So when I hit my junior year, and no longer in gymnastics, I joined. For that first week I could barely walk I was so sore. I'd come home from practice, too tired to even eat dinner, and just collapse on the couch in frustration. It was HARD. But as you may recall, I'm not one to give up. It slowly got better, and I was excited for our first meet.
It had up until then just worried about not being last. What ever the drill was, I aimed for just beating our slowest runner. In the meet however, something happened. My coach had encouraged me to run with a team member with experience, let her set the pace for me. That worked great at first, but I found myself further and further ahead of her. At that point, I just kept going. I felt surges of energy, and as the last mile unfolded, I would aim for a runner, and try pass. And then on to the next runner. It was very motivating. And when the meet was over, it turned out that without realizing it, I'd passed many team-mates and found myself fifth on our team. I was completely shocked. I'd watched that pack of girls during practice, and they were always SO far ahead of everyone else. The Kinnecome girls were almost always first and second, and then their buddies took the next three places. But here I was FIFTH. I'd broken into their elite circle.
And it was just so AWESOME to hear my coach say, “Wow, look what you can do! I'm so impressed!” I of course felt like I was going to pass out. It was a strange feeling, all floaty and happy, and a bit eerie. (I didn't know about “runner's high” at that point, but I sure did afterwards!) My team-mates were so encouraging and congratulatory. I was elated. And hooked for life.
Our team was really close-knit. There were always encouraging words for effort and achievements. Self-less acts of kindness. We all bought matching jackets which we wore with pride, not just during warm-ups, but almost like a letter jacket. Our names were embroidered on them. See, I still have mine!  (Yes, I'm a packrat.   A very good one.) 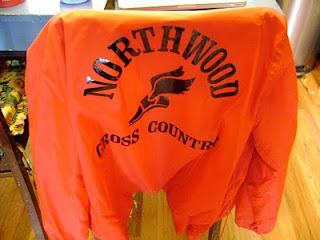 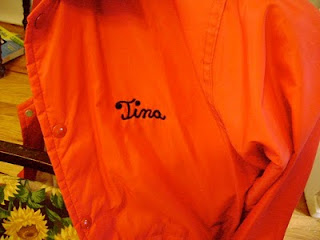 We did intimidate the other schools. Our team was huge compared to other schools of our size. So we'd show up, emerging as a throng from our bus, in our matching, snazzy jackets. And with bells on. Literally. We tied jingle bells to our shoes. This was partly to freak out the other teams with our unity, but also for help during the races. Without having to look behind, you could tell when a team-mate was approaching. Or you'd hear someone ahead of you, motivating you to catch up. You could catch the rhythm of your pace more easily, make adjustments. And it was just plain fun!
I'm finding myself tongue tied to explain the joy of it. Gymnastics is also a team sport, but the competition is fierce, and there's a lot of jealousy that comes out when someone learns a trick before you. Not so in cross-country. We were united and encouraging of each other, celebrating other's accomplishments as if they were our own. I haven't experienced anything like it since.
Posted by Tina at 2:26 PM

I never ran cross country, but my husband did, and so did two of my kids, and I have to say, I love the way the teams support and encourage one another. Kerry is still best friends with his team from high school. MY oldest kid loved everything about cross country except the running! My youngest even loved the running part! Kerry liked it for the discipline and the cross training. I like to cheer the runners...

what a great story...it also speaks to what happens when we work with one another than against one another...cool that you still have the jacket too...

keep running,
you will have the fittest body.

Wow. What a brilliant experience. One of my boys ran cross country in school, but it was never a big thing like this and these days, he is more into cycling, climbing and kayaking. great memories. I agree about team work; it is so special.