Y is for YellowBoy @ Life is Good

YellowBoy is an amazing kid. I gave you a brief introduction in one of my first posts, and I shared about his passion for cooking in E is for Eggs, but he's been waiting almost the whole alphabet to get his own post. He declined being featured earlier when the letter of his real name came up, preferring instead to wait all the way until Y.
So let's tackle the subject of yellow first. As a toddler, if someone sat him down in front of some crayons and asked him to color, it would be all yellow. Seriously. For several years ALL of his art from pre-school and Sunday school was monochromatic. In yellow. When I asked him why, he responded rather indignantly, “It's my favorite. That's why I use it.” But what about the other colors? Don't you need them, even if they aren't your favorite? “Why? All I need is yellow. Everything should be yellow, Mom.” And so it began.
He sleeps on yellow sheets, in a yellow room. 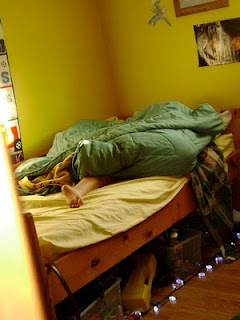 He wears predominantly yellow clothes. This is his laundry pile from last week. 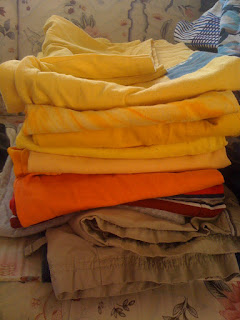 This is his winter coat. 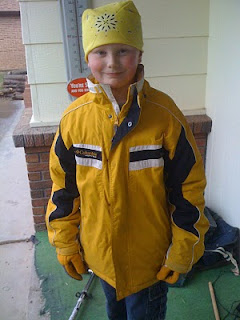 (Note also yellow bandana, and yellow gloves.) Sissie even found him yellow shoes. He was thrilled, but I don't have a picture of them. . He loves fleece blankets. In yellow. 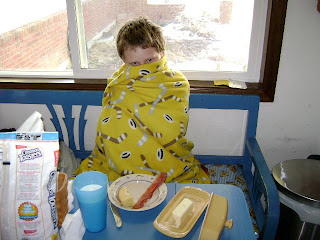 And even yellow weapons. 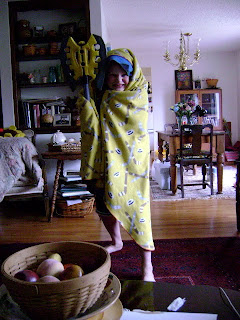 He calls himself the Yellow Ninja.
Of course there's more to him than a passion for a certain color. He's also creative. He made this armor completely by himself, using cardboard and duct tape. 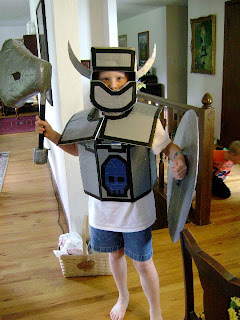 And as you know, he likes to cook. “I think I want to be a chef, Mom. And have my own restaurant. And the whole menu will be mix and match, for the picky kids to find something they like.” 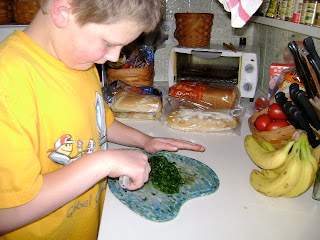 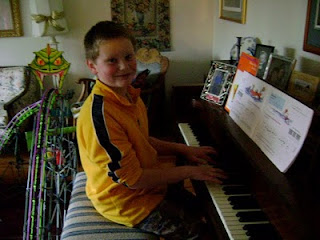 Not only creative, he's a compassionate person, too, very considerate of other's feelings. He'll plop down on the couch next to me, “How ya' doing, Mom. Anything you need to let out?” He'll share how he's feeling, both mentally and physically, in great detail. “I feel like there's this bubble of energy inside of me, and it wants to pop.” “My throat feels like jabbing needles, and then when I swallow, it's like scratchy glass pieces.” None of this, “It hurts!” from him. And he likes to ask random questions. “Do you think we could make cars that run on water? It would be cheaper than gas.” “Do you think you'd be able to swim in milk?” (He's a huge milk fan. I have to restrict him as if it were pop, or he'd drink a gallon a day.) “Do you think I could make a perpetual motion machine with magnets?” “When you take a Tylenol, how does it know it's for your throat and not your toe?”
He's a natural born actor. He does an amazing fake french accent. He cracks me up with, “How about some lemon pepper chicken, cheri?” while winking at me in his French persona. Wish I could record it for you. It's rare that you'll see him running around without being in character. “Mom! I'm a ninja squirrel, and I can fly!” This drives Jake NUTS because his animal antics usually involve trying to eat his brother's foot, or arm, or ear. Complete with animal noises.
He's a good friend. He made this picnic for the neighbor kids one Saturday. 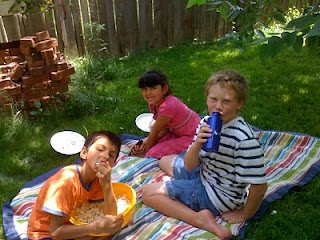 I was gardening, he wanted a backyard party. I told him it was fine, as long as he did it all. He cooked hot dogs, I relented and made my famous popcorn and he served his famous lemonade. (He gives everyone his recipe, when given the chance.) He does very well with younger kids, easily joining in their level of play. They adore this. But it's hard for him to keep track of his things. “I don't remember who I let borrow it.”
And he's deliciously goofy. 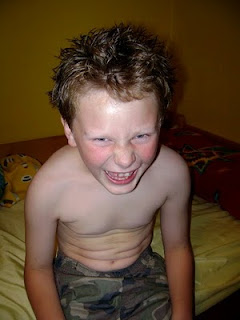 And will sometimes surprise you.  I was taking pictures of the newly completed rope ladder for the tree house when he just ran up and into the camera. 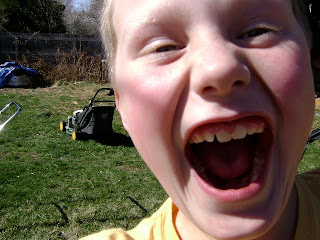 But he's growing up. When we were in Ocean City, MD for our recent vacation, he got a dragon henna tattoo. 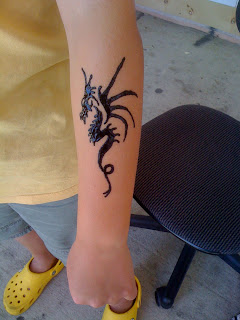 (Please note the yellow crocs.)
I see the little boy slipping away. He much prefers Dad these days, and is old enough to stay home with just Jake. But he's still a cuddler, and I treasure those moments. Pretty soon he'll be a teen. But maybe with his sunny, YELLOW personality, perhaps not a sullen teen. A mom can hope.
This is  Alphabe-Thursday Y.  Check out the other great Y posts at the fab Ms. Jenny Matlock's.
P.S  Don't worry, not leaving out his brother.  He had his turn in Just Call Me Jake.
Posted by Tina at 6:23 PM

ha yellow boy sounds like a cool kid...hope he gets to be that chef...the nerf battle axe is the bomb...and i used to have a yellow xterra too. yellow is cool!

Such a lovely post. You should print this off for him, if you haven't already, and put it away for safe-keeping. Someday, it will mean even more to him than it does now, how much his mother loved him.

What a wonderful post! I love that he wears and lives with his favorite color everywhere.

That was very good. I read every word and I feel that I know him now. He says quite funny things, doesn't he? Good Yellow Y post.

Wow~ his armor suit is amazing! Love his yellow crocs :-)

He sounds like an amazing boy! You can just feel his energy popping off the computer screen, that grin is contagious! And I love his suit of armor, he's really very talented. Great post! Kat

What a great kid! I love yellow boy!

YellowBoy sounds like an ideal son and totally fantastic. I predict big (and yellow) things in his future. :-)

I'm a new-comer to Alphabe-Thursday, but I may have to join in.

Just wonderful - lovely to know where his name has come from. He sounds like a wonderful son and friend - due in no small part to him having such a wonderful Mom!

He sounds like a wonderfully happy boy and his love for Yellow is a good sign that he will be a happy adult....beautful post thank you for sharing his sunny personality with us...bkm

Your Yellow Boy sounds like a wonderful, happy & creative human ... and the fact that he had the patience to wait for Y week is oh so very mature, yet cool!

What a wonderful post! I think of my Erik who is eight years old when I see his cardboard-armoured suit.
Yellow Boy has a wonderful mother who really loves him.
Best wishes,
Anna
Anna's Y-words

What a sunny yellow post! I can see how he brightens your life. I have/had 5 teens so far - they don't all become surly! (I have yet to have one, knock on wood) so I am willing to bet he won't be one either.

Yellow boy is such an amazing kid. I am sad we don't live next door to each other, because something tells me he and my two would have got along really well.

When you take a Tylenol, how does it know it's for your throat and not your toe?- and what was your answer?

Long live Yellow Boy, and may there be more of his kind.

Thanks for coming to my birthday party. Any food is welcome, so many people have come I'll be running out soon!
Great post from you too
Jx

Yellow boy sounds like an awesome kids! I too admire his passion for yellow, and live with..

Awww what a great post! He has a real passion for yellow, huh? I've often wondered how Tylenol knows what part of your body to make stop hurting too.

What a guy! I'm with him on the yellow - maybe it really does have something to do with his sunny disposition. You know, I'll bet he won't be a sullen teen - not with this start!

what a lovely child. i think he will be the most interesting adult!

It's important to know what you like, and this boy likes YELLOW. Creativity, intelligence and compassion in the same person - a rare and beautiful combination at any age.

Congrats on a skillfully, and I'm sure proudly, written post.

Hmmmm. I don't think my comments have been showing up here. I commented on this and another post yesterday, but I'm not seeing them. Hopefully this time will work. I love that you wrote about Yellow Boy! He is such a neat kid, and he is so blessed to have such a neat mom!

Well he sure is a neat sounding kid for sure! I love that he loves YELLOW like that...it is such a happy sunny color. Really says a lot about a kid...so deep too, I have two sons myself, and very much deep and compassionate as well...really cool to hear there are more boys out there like that.

What a great post about your sweet, little Yellow Boy! Yellow is my favorite color, too. It's the first time I've ever met a boy whose favorite color is yellow, so reading your post was such a treat. Love the color of his bedroom walls (cute picture of him under the covers!), his jacket, his crocs! He looks like he has such a sunny personality, so the color yellow fits him so nicely. Love the armor he created as well! Thanks for sharing and thanks also for stopping by my blog.

I think Yellow Boy needs to meet my blue girl. they could get together and make green!

I think he's going to end up in some creative endeavor. With his imagination, he's definitely not going to be an accountant!

I think I love him.

He is totally adorable. His mind is so creative. I was going to suggest we introduce him to one of my Grands in a few years but I see Terra already has dibs.

This was a charming and sweet stop on our little journey through Alphabe-Thursday's Letter "Y".

Thank your for making us all smile by sharing this sweet little yellow lovin' boy of yours!

HEY! GUESS WHAT MY VERI WORD WAS? yelloo. It was pretty darned close!

What a great kid he sounds like. Maybe he'll be a chef someday and the restaurant will be all yellow. Ya never know. Or maybe he'll be an inventor of something yellow. Good Y post.