How to Take a Mental Memory Picture 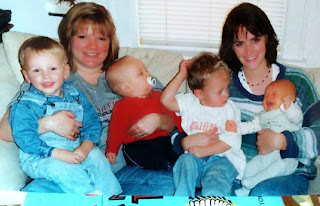 Jenocide (see nickname tab) shared a treasure with me this morning on facebook. This picture is just so precious to me. We are each holding one of our own children, and one of the other's.

That's Tiny Transporter right there in my arms, in one of my favorite outfits of his, the jeans overalls. I'm also holding her youngest. The picture just brought me to tears. Those tiny boys are so grown up now. That's OYT screaming his head off in her arms. He screamed a LOT as a child. She's holding her oldest, too.

Seeing this picture reminded me of a habit I developed when they were young. (This was before digital cameras...) I didn't take a lot of pictures because money was tight and developing film was expensive. Then there's the part about if you have two children under 3, you rarely have your hands free to take a picture. Not to mention, the moment you want probably includes YOU. So no picture.

What I would do instead is take a mental picture. Purposefully say to myself, “Remember this moment. It's rare. They're growing up too fast. REMEMBER.” I'd like to share one of those moments with you.

I'm a mountain biker (or was, before all these breathing issues) so when The Transporter was born, I got a Burley bike trailer and took him with me. We upgraded to a double when OYT joined us. We went all over town, exploring and finding ways to connect the pieces of the (now finally connected) developing bike path being built.

By the time of this mental picture, the boys are almost too old for me to drag them around. They barely fit in the trailer anymore, and were too tall to put the mesh protector down. (Yeah, probably illegal...but they were wearing the seatbelts and bike helmets. You know about my bike helmet thing...)

Imagine a 5 1/2 year old Transporter, well, you don't have to imagine, I do have this: 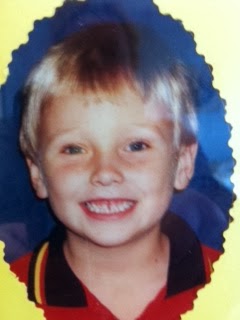 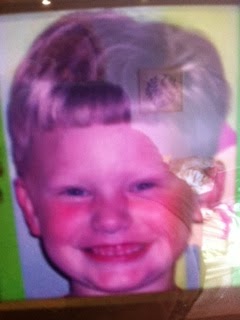 crammed into a Burley trailer. The Transporter is wearing neon-green sunglasses, much too big for him. He insisted on bringing Woody (of Toy Story fame) with him. We are going down our favorite hill at a speed that causes them to giggle and scream with roller-coaster glee. The Transporter has Woody outside the trailer, flying like Buzz would, and asks me to turn around and look. I do. And wish for my camera. But at 20 mph (which is really fast on a bike with a trailer and 80 pounds of boys) it's a quick glance and no way would I have been able to capture that shot. So I took it in my head.

I can see it clearly to this day. The silly grins on their faces, poor Woody flying along beside the trailer, and I can still hear their delight at the adventure we were having.

Do you have any mental pictures you'd like to share? Or are you one of those perfect parents who has pictures AND video of every milestone?

The memory is more important. (And did Woody survive?)
I took photos when I lived in London, but the scenes I remember with the most clarity didn't need a photo. Like the view from the roof of where I was staying, which is where a group of us would hang out with wine and cheese and just watch the night life go by. Or the two mean looking thugs we encountered on the Tube one time. They were really scary until one turned to the other and asked 'Do you think Buffy will be at the party? That would be smashing.' Yeah, totally ruined the mean look!

I only wish I could remember stuff better, I used to give it names to help make a recall. I lost many of my photos when a certain someone decided that they wanted to remember my past better than me. Though oddly left me all the Disney photos, weird I guess and so am I. New memories are even better, I know I don't know either.

Nice!
I always talk with my kids about what they did when they were younger. It usually gets a chuckle, and helps me to remember also....
"Dad you told us this a thousand times, you're getting old!"

At my age I have trouble remembering pictures of what happened lately, let along a while back LOL.

Lots of mental pictures taken by me, that's for sure. Mostly of scenery on my travels.

I have many mental memory photos and digital ones.

man, I have rolls and rolls of film that never got developed, because I was really good at -taking- pictures, but I was horrible about getting them developed. I'm not even sure I can get that stuff developed anymore.
So, yeah, I was more like Indiana Jones dad. I "wrote" it down so I wouldn't have to remember it.
(I do have hoards of developed pics, too, though.)

smiles. we hava box of pics that the boys like to drag out and hear the story of us...

hmm...made me think of one of me catching the biggest bullfrog....

Hi Tina .. great photos .. love them all - what fun. I have to rescue some of my pics and get them sorted out ..

Those memories survive - but I suspect get prettied up a little, as does the memory with events!!

So first: your comment will go up in due course; I have a complicated writing schedule that I stick to not at all; when it goes up I'll try to notify you. But it WILL go up.

Second: Excellent story! I love the image of Woody flying like Buzz as you cruise on your bike. 20 miles per hour is FAST! I was never that good on a bike.

I take a zillion pictures. I have my phone/camera with me all the time and because digital pics cost nothing I will take a picture of almost anything. I want to never forget even a single second of my life. I go back and look at them all the time and it helps me recall things that have slipped away: walks in the woods, going to the beach, shopping for groceries, everything.

One little picture lets loose a flood of memories about that day and that time.

I have this picture of Mr F, our second youngest. It was taken on December 27 -- I remember that date, I'll get to why in a minute. We had gone for a walk in the snow, to get out and get some exercise and fresh air. The boys were little -- almost too little to go out in the snow.

It got cold, bitter cold, and Mr F doesn't like to wear HIS mittens, so I gave him my gloves, and he got ahead of me at one point, and looked back. I snapped a picture, and he is grimacing into the wind, an intense look on his face, as he stared back into the wind to make sure I was following him as we walked past the frozen pond.

I remember that walk, and that day, perfectly, because of that picture and others I took. I remember how silent the park was, not even cars going by. The sky was gray, uniform clouds. The ground was pure white, crispy, almost-ice snow. The trees were black and bare. The pond was iced over and all you could hear was the wind, which whipped up and up and up.

I remember that day perfectly even though I might otherwise forget it, because of that picture. I might otherwise forget it because before getting the boys into their snowgear and setting off to the park to go for a walk in a frozen wasteland, I had spent the entire night before awake, caring for my mom, who was dying of lung cancer, giving her morphine drops on her tongue every 15 minutes so that she could breathe.

I knew she was going to die, and Mr F's face when he turned around and stared into the wind captured perfectly how I felt.

It's not a feeling I want to bring up all the time, but sometimes I want to, and when I do, I can feel again all over the sadness, and the urge, that next morning, to just go, anywhere, and let everything drift away into the winter ice.

Ah yes, that picture captured in the mind. I do not have many actual pictures from the past. Thus, we tell the story of the pictures in our mind's eye with our words.

Lovely photos from a lovely lady.

I do both... lots of memories but I love photos as I just can't remember every moment:)

I was great at capturing everything for our first kid, but I became a total slacker with #2 and #3. I felt like I was missing out when I had a camera in my hands.

Even to this day, I leave my smartphone in my pocket. I'd rather live in the moment instead of just capturing a snapshot or video of it.

Dear Tina,
I have taken many real photos, but I know exactly what you are talking about when you talk about mental photos. I have many more of them, and sadly, they are always my very best pictures.
Best wishes,
Anna