IWSG: Ideas for When You're Stuck 2 - WIP 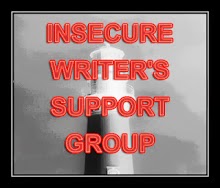 In last month's IWSG post, I gave some ideas for what I do when I'm stuck writing a blog post. Today I'd like to share my tips for what to do when you're stuck in your work in progress, your WIP. (Which makes me feel like a real writer when I say “WIP”, cuz, like, I know the lingo and all. I'm in the club!)

Maybe I'm not the best person to take advice from, considering I've been writing my first draft of my first novel for three years. What you need to understand though, is that I've really only been writing it about four months, if you count the actual time I've put into it.

I did a NaNoWriMo in secret. Got a lot done. That encouraged me, so the next February I did BuNoWriMo, which stands for Burrow...and you know the rest of the acronym. You can find them on facebook and I highly recommend you do because talk about a supportive environment! Got a lot done. Actually declared myself a participant and joined the banter. Same the following year. Then if I count the scraps of time I've invested that wasn't during a big, supportive push like that, and that's my four months. I'm at about 35k.

Just sayin', so you don't think that I think I'm an expert.

My novel is a sci-fi/thriller (which IWSG helped me realize when I was having genre-confusion – thanks wonderful folks!) and this rough draft is set in two separate time lines. I'm not quite sure how that's going to work out...but that's for the revising part. However, it leads to my first tip.

If you're stuck on a certain section, go write on another one. If the present is plaguing me, I go write a scene from the “back in time” part. If you're a plotter, you know what's going to happen, pick something you're in the mood for and write that instead of where you were stuck. Just because you're methodical, organized, and all those things I'm not, as a pantser (see, I really am in the club!) doesn't mean you have to write it in order. Movies aren't shot in order. (Now that's a club I'd like to join – screen writing...)

Go back and re-read what you've written. Maybe not from the beginning, but read a section. Bask in the wonder that is your writing. It's like finding a piece of your wardrobe in the bottom of a drawer and saying, “Oh yeah, I loved this shirt! Great shirt!” Instead you're saying, “Oh, yeah, that IS good. This is going to be a a good book. I remember that part more clearly now.”

I get inspired when I do that. This might not work for you if you work more, um, consistently on your WIP than I do, since you probably remember all that you've written, but giving yourself a little pat on the back never hurts. Just don't edit what you're reading. (Not that I have that problem or anything...just, ahem, a warning...)

Write a scene that's key to the book. It will make you feel like you've really accomplished something. Yes, plotters, it might not be where you are, but you already know where it goes. Me? I have a vague idea what scenes might be needed to get where I think I'm going, so I go for something that might be useful later on. At least I'm writing!

Regardless of what kind of writer you are, you just have to keep writing. It's that discipline thing I talked about last month. JUST DO IT. Good luck!

Alex “Ninja Captain” Cavanaugh  is our leader for this wonderful, supportive group. Don't forget we even have our own website now.  Be sure to check it out if you haven't already, and "like" our facebook page, too. I'm so impressed with what these talented folks are doing to promote this group! Encouragement month long is now just a click away!
Posted by Tina at 6:56 AM

You are indeed one of the club, Tina!
I'll go back and reread, trying not to edit when I do that of course. But fortunately I don't have to do that a lot as I tend to just plow through the first draft and get it done. (Not my favorite part of the process and I just want it to be done!)
Be sure to stop by - posted something that might interest you and the Engineer today.

This is some good advice. I cannot, for whatever reason, force myself to write out of sequence, but going back and re-reading usually gets my juices flowing!

I write out of sequence. There are snippets all over, waiting to be slotted into the correct spots... or not...
Writer In Transit

I'll often jump ahead to the next scene and play connect the dots later.

Russell recently told me that I should write kids' books because I love anthropomorphic animals and items so much. I have thought about that but how does one end a story? That's the hardest part for me. Even on my blog after I post pics or just write, I am at a loss on how to end it.

I remember (a whole few months ago) when I first used WIP and I was like, "Wow, I actually know a writing acronym!" I was so pleased with myself. =)

I love your advice on going back and reading some of your own work. It's very inspiring to do that.

Exactly. If you don't have the ingredients to make salsa, but you do to make cookies, break out the sugar, butter and eggs. Then, after you've had a chance to go to the store to get your undeniably tasty salsa ingredients, make the best salsa you've ever made. In the meantime, you'll have dessert first and all will be well.

Great advice.
I especially like "Write a scene that's key to the book"
I never plan too far ahead, so it would make sense to try this.

Some great advice, thanks for sharing :)

I hate jumping around in a WIP, but sometimes some scenes are easier to write then others and I personally , love writing either the really sweet scenes or fight scenes. Great tips.

I'm not one for writing out of order. It's not my style and not how I think. However, I haven't had any issues with stuckness so far.

If I ever heard someone like Gaiman or Rowling use the term WiP, I think my chin would fall off. Literally. Right onto the floor.
But I keep super glue around for things like that.

i think it is def good to jump to a place that excites you and you can always back fill story later...sometimes you just need a new perspective and have to capture the energy while you have it...

When I get stuck, I write ridiculous comedy scenes:) The change of "scenery" helps me recharge. Then I crack the whip, enough of that nonsense, get your disciplined derriere back to work! Or I just giggle my way to bed:)

Hi Tina - looks like you've given everyone lots of useful food for thought - so I guess you've been shopping for some of that fresh stuff that makes the brain go round?

Happy writing and you accomplish so much .. cheers Hilary

Good tips to keep the writing going, no matter what. Good to see you making progress and loving the writing jargon!

I always write out of sequence, sometimes it's the only way to get the novel moving again.

You are so right, Tina….

We NEED TO WRITE…

I am now in the process of REWriting my novel. After three years and tons of revisions, I am working with an editor now who believes in the story. Today she decided to change my tense from first person past to first person present….

FUN…. talk about totally rewriting my book. I hate to admit it though, I think she's right...

Good ideas. I'm an old computer programmer so I tend to be too linear in my thinking. Sometimes it's good to mix things up a bit.

I still like the advice "Just write and something will happen"