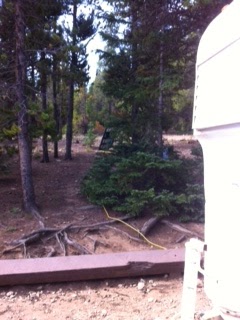 There are distinct advantages to camping this way.  Generally, campgrounds have posted hours for when you're allowed to fire up your diesel-powered loud as all get-out stinky generators so that you can watch your satellite TV, use your microwave, and probably other luxuries requiring electricity which are the activities I go camping to get away from. I really don't understand these people who fire up theirs at the minute they're allowed in order to microwave their breakfast. 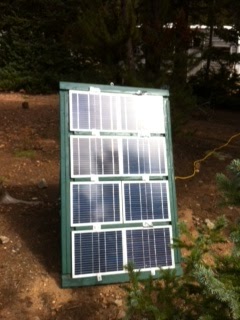 Maybe I'm a snob because we camped in tents for years, just the two of us, then with babies, who became toddlers who became small children. We didn't get our camper until the boys were 5 and 8. I'd already done the potty chair, high chair, porta-crib years, in a tent. I think I earned my camper fair and square.

I've been referring to our “rig”, so I finally took some pictures. 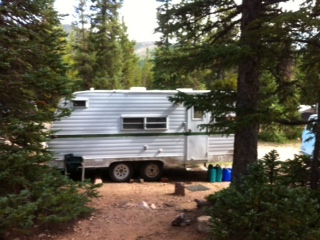 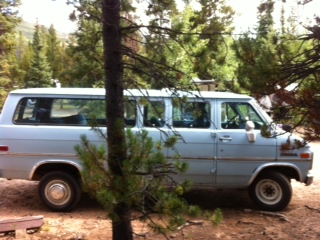 The Beast is a former Department of Corrections vehicle. If you look closely at the door, you can see the outline of what used to be the identifying sticker. 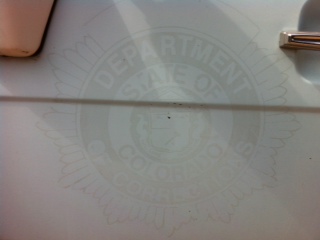 It seats 12, and still has a whole station wagon of cargo room behind the third bench. (We threw the firewood back there.) It's nice when you can separate your children by a whole bench ;-) though it's not as necessary now that they are teens. They behave reasonably well most of the time, I'm happy to say.

So how does the solar panel thing work? It has an extension cord so you can place it in maximum sun, and that connects to the solar charge circuit, which connects to the battery bank. For this trip, The Engineer even had time to install a special volt meter with a read-out. He's been very “are we there yet?” with that particular device, asking whoever happens to be able to see it at the time to report the voltage. We've teased him of course. “Hasn't changed in the last THIRTY
SECONDS!” 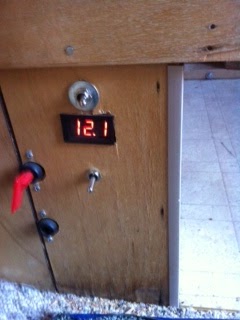 OYT sure enjoyed this particular trip. He saved up a LOT of money to buy this RC truck. 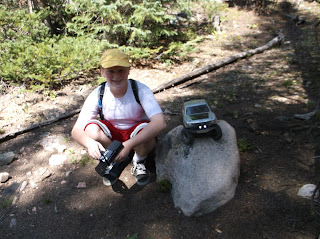 The terrain right at our campsite 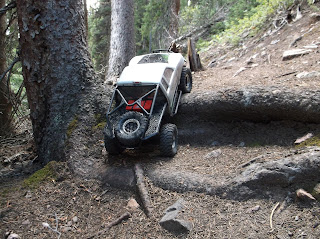 couldn't have been better for “off-roading.” He even took the truck on the hike, and found a “river” to cross. (Don't try this at home kids because this one was protected by 7 man hours of waterproofing by The Engineer and son.) 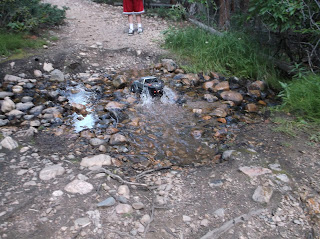 I don't know how many more camping trips The Transporter is going to be willing to go on. He's jonesing for his XBOX 360, and to chat online with his friends while killing mythical monsters. A solar panel may be quiet and get the job done for us, but it won't do my CPAP and his gaming. Guess who won?

P.S The RC part of this post was written by OYT.

P.P.S After reading this post, The Engineer would like me to add that the solar panel could CERTAINLY do both.  Not that we'd let The Transporter bring his XBOX...
Posted by Tina at 7:19 AM

I bet you save money using that solar panel.
My idea of camping is still a three star hotel.
Glad you had a good time even if there were Internet withdrawls by some people.

i am with alex, the dinner bell brings the food... not i have to find it. my luck i would be eating berries and die cause they are poisonous...

How cool is that! I love alternative energy. We use solar to power small things like Christmas lights.

ha. cool rig on the solar panel...that is very cool...i grew up camping...even after driving age i still hung out but got my seperate place which was cool....

Camping in a tent is camping, in my mind. I did it in my twenties, but it never appealed to me that much. Luckily, hubs agrees.

I would say you earned your camper, too.

Hi Tina .. last time I went camping was in Botswana in the Okavango Delta - it was great = no facilities we took everything with us ... well they did I just happened to end up going at the last minute ...

I'd rather like to camp more often I think .. and the solar panels sound so great - I'm sure true campers do that!!! Though I do like my creature comforts ..

Must have been a great time .. cheers Hilary

We didn't even have a generator when we went camping in our VW Bus as a kid. Just the fire and a kerosene burner.

We put solar panels on top of the house when we moved. I never thought about buying one for something like camping. Great idea!!!

Very interesting report from the camp. I never experienced such things,well to tell you the truth camping is yet another experience in our country. Keep reporting !!! LOL
Happy Times Ahead
Best Regards
Phil

What a great idea on the solar panel. It must be very handy to be married to The Engineer!

I want solar panels, but we can't have them. :(

Although I'm not for camping, I'm also not for camping with electrical gadgets. TVs and microwaves do NOT belong on camping trips. If you can't do without those things, stay home.

It's been a long time since I've been camping, unless you count visiting my sister and her family at their trailer park in Stayner. (And we usually only visit for one day.) When I've got vacation time, I generally prefer to spend it at writing workshops, visiting faraway cities, or just relaxing at home. But I understand the appeal of getting away from it all.

The solar panels are an awesome idea and I'm sure you'll get lots and lots of use out of them. Your camping looks like a lot of fun... I'm not a huge camper, but then maybe I haven't been to the right place:)

What a great idea on the solar panel. Thank you for sharing this post.
Solar Shop

That solar panel is so cool. And, I think it is great how you get out there and enjoy the great outdoors :)

I never went camping before :-/

I think that's fabulous using a solar panel Tina. Much better than a noisy generator. I am glad you could use your CPAP machine. We used to have a camper some years ago and I loved it, miss it these days. Never did the tent part. I guess these days I camp in cottages.

Wow, I would like solar cells in my dragon cave. It would make my life costs cheaper.

I love you for that solar panel to power your camping! I am always excited to read about/meet DIY people because I enjoy tinkering with everything. When my now 15-year old son was 4 and was out with his dad and his sandal strap broke, he solemnly told him "mummy would have fixed that".

:-) What I am amazed about is, until you mentioned that part of the post was written by OYT, I had no idea. That's fabulous!

Glad y'all had a great time! May you enjoy many more camping trips! And may you never camouflage that spot where the sticker used to be!
It is kinda cute.

Hi Tina! Here I am, as promised! Love the solar panel. Hopefully, there will be zillions of them being used in the not too distant future. I've never been camping and I'm SO glad my family wasn't into that. I'm with a couple of the commenters above. Camping Out to me means at least an air conditioned RV! Have a great week! PS Nice to meet you from Jenn's blog http://www.smartassdirect.com/

Solar panel is the thing for Colorado, where the sun is always shining (as I remember it) >:)

Great post! Thanks for sharing! Arf! Arf!. I'm kidding. Indeed, solar panels would be a distinct advantage in places that actually get some of the rays from that mysterious glowing orb in the sky.

Your camping expedition does have an ecological theme to it. In reference to "in tents" that was made in our previous comment, that was a play on words :)

Has this comment ended yet? Yes it has, my human friend.

You won? :)
Last time I went camping it was with a tent, and not much else but clothing and blankets. We cooked by the fire. Very tribal. This looks a lot more interesting. Enjoying the wilderness with so many conveniences around ... so long as I don't have to carry any around.

I think that is a cool experience hope you really enjoy it.
Solar Panels Perth

I like the face that you made use of solar power. I have also been using it whenever we are out camping or traveling. It really is a big help.