Plans Change ~ Part 3: The Swede and The Nutritionist

In preparation for my Challenge Series: Adventures in America, I've convinced The Swede, my Dad, to share the story of how he and my Mom, The Nutritionist, met, fell in love, moved to Sweden, then in the middle of our childhood, moved to America. It's great to have you here Dad. Thanks for taking the time to share your story with all of us.

Plans Change
by Leif Bilen
My American exchange adventure went by very quickly. On the way back across the Atlantic I reconnected with the other students, and we compared notes. Our dress code had changed among other things, and when I greeted my folks I had a new haircut: a crew cut.

The American “dishes” I brought home were actually not all that nutritious, but hamburgers, French fries and banana splits tasted awfully good. Please don’t tell the Nutritionist.
My American year was a wonderful experience, and although it put me a year behind in the rather stringent academic high school I came back to, I never regretted it. I had two more years before graduation, and then mandatory military service in Sweden, before starting my university studies.

“Will I see anyone in my American family ever again?” The answer to that question came rather quickly. Brother Bob came to visit over the summer of 1959, and we toured Europe together: two 19-year old fellows in a Volvo, where the seats reclined enough to be able to sleep in some semblance of comfort.

I introduced him to most of my friends, many of them girls, wouldn't you know? I am sure we exchanged a word or two about his sister Bonnie. Although I dated some Swedish girls, during high school and army days, I wasn't able to put his younger sister out of my mind.

I had a few months after being discharged from the army before the start of my first semester at the university. I decided to “visit my American family” as I described it to them in my letters. Bonnie’s father suspected there was more to it, and I admit he was right. 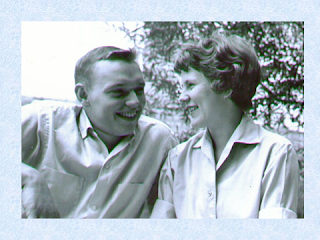 During that summer both Bonnie and I realized that we were not just foreign exchange brother and sister any more. There was a lot of mutual respect, but also some caution flags: How is this going to work; two continents, different cultures etc.

The following summer Bonnie visited Sweden and the land of the Vikings didn't scare her too much. As she went back to New York to finish nursing school, we had agreed to stay in touch, but there was no restriction on dating others. If it was God’s plan for us to spend our lives together, it would surely become clear to us.

The only way to stay in touch was via airmail letters, and there were lots of them. After finishing half of my university credits, I had had enough of letter writing and decided to take some time off and move to New York for a while and leave the rest to the Lord. 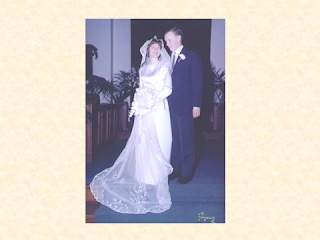 Eight months later we were married. I had a job at Chase Manhattan Bank, while she finished her B.S. in nursing. We moved to Sweden for me to finish school, and I promised: “If you don’t like it, we can move back to the States.

We stayed for ten years and I had a promising teaching career in the public school system as well as some work at the local teacher institute. I also had the privilege of working with my teaching mentor publishing several books for kids to learn English.

In 1974 I took a sabbatical so that our family, which now included three kids, could spend a year in America. That didn't work out as planned; we are still here, and I eventually became a U.S. citizen. After all, grandpa shouldn't be the only foreigner in the family.

None of this was planned in 1974, and I have found out that one’s life’s path is full of small course adjustments. When we stay close to God and listen to his voice, he directs our path and sometimes these adjustments eventually lead to major changes. In my case it was a change from teaching to a corporate career with Volvo, which turned out to be a nice ride (pun intended).

People wonder these days what happened to that handsome young Swedish foreign exchange student Bonnie married, and so do I at times. I am an elderly U.S. senior living with my prairie home companion at the foot of the Rockies.

The two of us are very different, and that has in some ways contributed to success in our marriage. Neither of us is perfect, but we are perfect for each other fitting together like two pieces in a puzzle. 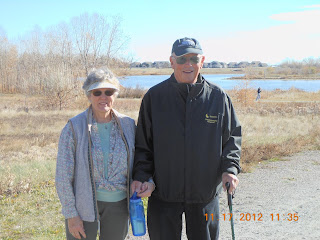 About the Author:
Leif Bilen is the author of numerous books, including text books for Swedish students and adults to learn English.  His latest book, "They Put me in Charge... and Told Me I Didn't Have a Clue: Learning to Lead by Listening to Bosses, Co-workers, and Subordinates" is about leadership and his Volvo career.  It's available at Amazon, and local bookstores if you happen to live in Colorado. 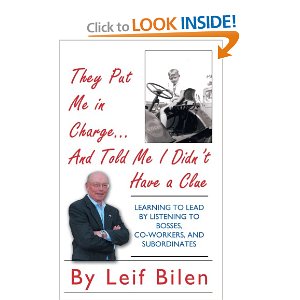 Please come back Monday, April 1st when The biggest blog-hop of the year begins.  My theme for the A-Z Challenge is "Adventures in America" and picks up with how the oldest of the children of The Swede and The Nutritionist (that would be me, Tina, the head-strong, type A, bossy one) coped with moving across the world when she was about to turn 9.  Can't wait to see you and read YOUR challenge posts.

Email ThisBlogThis!Share to TwitterShare to FacebookShare to Pinterest
Labels: Adventures in America, jobs, moving to America, The Nutritionist, The Swede, Volvo

I'd say a happy ending, but their adventure still continues! Wonderful story, Tina.

Hi Leif and Tina - what a great way your Dad has of telling stories - it's fascinating .. and that Volvo connection was a good one.

His book looks very interesting too .. I don't know much about Volvo - but the cars are much appreciated over here.

Well all's well that ends well .. the Viking Chick is here and we're blogging with her Dad -

Happy Easter to you all - Hilary

smiles...i agree when we keep our heart in the right place and let god direct our path...also our difference do make marriage all the sweeter...

Lovely story, glad it all worked out for everyone. Looking forward to your American adventures.

OK I did NOT see that coming, that your mom is your dad's exchange family's daughter!!!!! That's so cool! What a great story. I also didn't know he was a writer and author!!!

How sweet! It was meant to be.

What a great story! I'm looking forward to your A to Z.

I enjoyed reading the series, Tina. Thank you for sharing such a wonderful personal story.
PS: loved this line: "the land of the Vikings didn't scare her too much." Beautiful photos as well.

Life IS good. Your Dad has a compelling writing style. What a great story! I enjoyed every word.

What a wonderful life history! God is with them all the way!

Thank you for all your work in the 2013 A2Z challenge. This is so exciting!

Love this story! And the pictures. Thanks, again, to your dad for sharing their story.

Shannon at The Warrior Muse

The pictures are wonderful, the story telling great, as is the story. I will be writing about my 50 years in America for the challenge and it was great to read the story of another Swede in America.

Thank you so much for your contribution to making the A to Z Challenge happen once again.

I love a story that brings tears to my eyes. I'm so glad my Scandinavian Sweetheart followed his dreams too.

So glad I detoured over from your A Post to read your Dad's stories. What a lot of writing talent and insight you both have.

I really enjoyed his look back at 1950's America...I was there, too...although in Texas at a high school with an exchange student from Chile.

Thanks so much to you and your Dad for this glimpse into your Swedish/American heritage. Looking forward to your AtoZ 2013.

What a sweet story! Thanks for sharing!

OMG!
Tina, I am terribly missing here,
Sorry for that, Though i read the other post in relation to this. I am so glad again to be here, and eagerly
waiting for the rest to read.
Yes, indeed the pics are lovely too
Pleasant memories. Keep going!
Keep inform
Best Regards
Phil