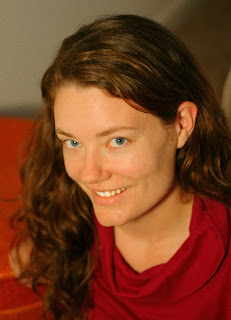 Please welcome another one of my Terrific Team Members, AJ! She guestposted at the A-Z Challenge blog about her novel Armageddon, so don't forget to check it out. It's totally cool – choose your own ending! Alright, let's get to know her better...

"Where do you hail from?"

I hail from the land of cheese and beer. On Wisconsin!

“Would you ever join a team that was headed off to colonize Mars?”

Maybe! I do get motion sick though, so they'd have to put me in stasis for the transit because otherwise I'd have a pretty sick tummy the whole time.

"Which is your favorite fictional character and why?"

Anne Shirley, from Anne of Green Gables. She is such a deliciously feisty nerd, and was pretty much my hero as a young girl.

"Name a book that didn't meet your expectations."

The last two times we've dressed up for Halloween, I've gone as a Korean soccer player, and Chris has gone as a German soccer player. I was in South Korea for the World Cup a few years ago so wearing my jersey is quite nostalgic.

"Do you know how to 'Gangnam Style?'"

I do! Unfortunately when we were in Korea last fall, we didn't make it to Gangnam. But we did teach my nephew how to sing it, and that was about the cutest thing ever.

"What items could you typically have in your pockets?"

Actually...only my phone, and that's only some of the time. My purse on the other hand is a treasure trove of pens, notebooks, a Kindle, a copy or two of my book, maybe some choir music...

Pie, of course! Because obviously the cake is a lie. Seriously though, my strawberry rhubarb pie is to die for. If Tina's a nice minion-chief I might bring her some this summer... (Tina seconds this motion)

Oh my goodness. Any commercial with anyone in a military uniform. Especially if they're returning and hugging their loved ones for the first time... I'm done for.

"What is the most unusual thing you have ever given as a gift?"

One year for my dad's birthday, we took a bunch of his underwear and used fabric paint to spell out HAPPY BIRTHDAY on the butts and left them out for him to find when he got home from work. He was.. not pleased.. but we thought it was the funniest thing ever :) 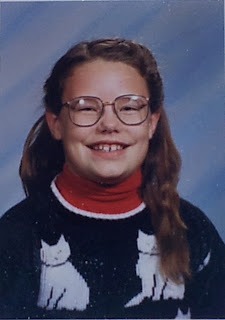 As a bonus AJ has joined Andrea in the new tradition of Tina's Terrific Team sweater reveal. So here's AJ in her favorite kitty sweater.  Thanks, AJ for sharing so much of yourself with us.  Don't forget my pie, and I'll join you in stasis.  I get car sick so easily they'd seriously have to drug me for the trip to Mars...but I'm glad you'll be along ;-)

Email ThisBlogThis!Share to TwitterShare to FacebookShare to Pinterest
Labels: #atozchallenge, A.J Lauer, getting to know you

I hear more about Gangnam's moves than I do of him at the World Bank!!

I will definitely have rhubarb pie ... love rhubarb and it's the season now ...

hahaha on the underwear...that is awesome...wish i would have thought of that...and def pie! smiles.

Interesting Halloween costumes!
Welcome to Tina's team, AJ. She needs all the help she can get. (Wait, did I say that out loud?)

loved the interview, Tina! your minion sounds like a lot of fun and she also cooks, so she has my vote!

but cake isn't a lie! and i get emotional when you're telling me that kind of harsh stuff!

The song "Gangnam Style" is one of my guilty pleasures! Also, your purse seems a lot like mine. LOL!

What a great idea, Tina! I wish I'd thought of this. Maybe next week.

Thanks for being here for me AJ, you are most excellent minions (said in the voice of Mrs. Vyse, of "A Room with a View" when she says "most excellent Honeychurches" after Lucy's piano recital for Mrs. Vyse's guests)(yes, have seen that one FEW times and should have been on my top ten list...but ten wasn't enough...I love too many movies...
Alex - I know you meant that in the kindest of ways...right?
~Tina

great interview... i enjoy'd it and i am happy you are sharing out "team"... my team is like ninjas... shhh. i am stealing your idea...

Boy, y'all get to your blogging faster than I do in the morning!

Hillary and Brian, hooray for pie! I do love it :)

Alex I am doing my best to help Tina out! Though sometimes I think I maybe make her a little nuts with all the emails..

Adriana, not to worry - the cake thing was a nerdy video game reference. I'm sure your cake is not a lie!

Jolie maybe we should have a purse dump comparison - who knows what we'd find??

Hi AJ .. I meant to add in about a Korean film we had in our film society this year .. it's quite long but I thoroughly enjoyed it - here's the link to a British newspaper article
http://www.guardian.co.uk/film/2011/jul/28/poetry-film-review

It is a very evocative film .. having recently spent time with people who are terminally ill ..

Cheers to you both - Hilary

Ok, AJ had me at Pie. But, then she had to nail it home with "the cake is a lie!" Sharing some geek love here!!!

I love the idea of IWSG and love reading the posts. I just wish my positive posts I write wouldn't come to me at the wrong times. :)

I'm stopping by today from the A to Z challenge. Congrats on signing up! Good luck. This is my first year with the A to Z challenge, even though I've watched it grow over the last 3 years. I'm also taking part in the Reveal on the 21st. I'm trying to share some positivity with my #WriteMotivation friends on Twitter (and to help keep me positive in the process)
Hope to see you around. :)

Hilary that movie looks great! We do like to watch Korean movies, so we'll add it to our list :)

*blush* thanks, Graciewilde! And glad to hear you agree about Eat, Pray, Love. Many people don't.

Hey Jamie! Thanks for stopping by. Glad you got my geeky reference :) And I'm following you on Twitter now, so hope we can connect there!

Yes, you two lucky humans are getting a comment from me, yes me, Penny the Jack Russell dog and modest internet superstar! :)

Hey Tina, your very own team. Quite the sweater reveal. My human used to wear a turtle neck. Needless to say the turtle wasn't very amused.

Nice getting to know a bit about you, my new human friend, AJ. Wishing you much fun in the alphabet challenge. Yep, where you humans bring further awareness of the alphabet with 26 letters.

And cause I'm such a lovable dog, I shall check out the link and see what's happening with you.

And Tina, my human and myself want you to keep smiling! :)

Yesssss! That sweater is awesome! You look so much happier about it than I was about my sweater vest! Maybe it's all about having sleeves.

Hey Penny! I think you are the first non-human/bot visitor I've had on the blog! Thanks for commenting here and there :)

You know it, Andrea! Sleeves are where it's at lol

Hi Aj,
I am sorry I missed this really.
More to know about fellow worker
Keep inform
Tina just aired mine today
if time permits pl do have a look at it.
Best