We were talking about comfort foods the other day when I was whining about being sick and trying to be comfortable. I mentioned soup, specifically New England clam chowder. I have lots of other comfort foods, and since I've been watching cooking (no surprise there...) a lot lately, I've gotten fixated on a show called, “The Best Thing I Ever Ate”. Celebrity chefs talk about their favorites in various categories, say “with chopsticks”, or “in a deli”, or “wish I'd thought of it”. I'm going to write some posts about my favorites in various categories, and pretend I'm on the show. Today is: comfort foods.

Nothing beats a dish we call Jenocide's Favorite. It's her childhood favorite (see nickname tab if you don't remember who she is) and she and her mother have made it for me when I've had babies, or surgeries, or just been sick. It warms my stomach and my heart.

It's a simple dish. Layer of mashed potatoes, layer of hamburger gravy, corn on top. It's super easy to make, and I can have dinner on the table in under ½ an hour. Or like today, breakfast in 2 microwave minutes! 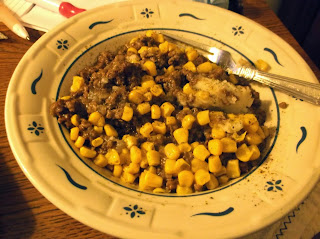 Chop onions and brown with hamburger, and seasonings -being generous with all the spices. Once hamburger is cooked, adjust seasonings. You will need a lot more salt than you think.

Toss in enough flour to coat meat, then add about a cup of water per pound of hamburger. (Now that I have large teenage boys, I make this with 2 pounds hamburger.) Let gravy come to a boil. Add a teaspoon or two, according to taste, of the Kitchen Bouquet. Keep adjusting seasonings.

Cook corn in microwave and mashed potatoes according to box directions while gravy is simmering.

Let people serve themselves in the proportions they prefer. If you've got OYT, then your left-overs will be short on mashed potatoes, as you can see in my bowl. That's OK, I don't do so well with lots of carbs.

It's just so deliciously simple, yet the flavor of rosemary comes through as a nice surprise, and the Kitchen Bouquet adds that “It's been on the stove all day” depth to it. Try it for dinner sometime soon. You'll be comforted.


P.S So what's this Kitchen Bouquet thing? It's a little bottle found on the bottom shelf of the store, under the display of all the dry packs of seasoning mixes. 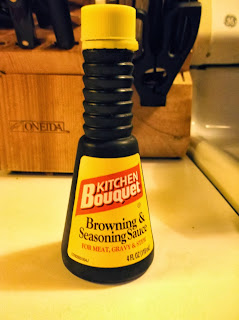 You know, taco seasoning, brown gravy mix, fajita seasoning, chili seasoning. Those packets you dump in your food with all the MSG and flavor crystals and make it taste so yummy without you having to have a rack of spices like some folks do...
Posted by Tina at 7:58 AM

I'm like Alex and don't do beef either but with ground turkey it might work just as well. It's similar to a Shepherd's Pie (the way we make it). Comfort food is nice.

I confess, I'm one of those people with drawers full of herbs/spices, but I also grow fresh herbs. Spice Racks aren't good since seasonings should be kept from the light.

Hope you gain strength from that comfort food.

have never heard of that sauce...will have to check that out....def a simple dish but sounds like one i would def like

Sound great. I have a finicky daughter, but might try this to broaden her taste.

Great idea for a blog post. I'm looking forward to the next posts as well. Have a lovely week.

Me and MSG don't get along. Several migraines later I don't use anything with msg in it. I rarely eat anything out of a box--kids love mac and cheese so there are exceptions. Especially when I don't feel like making it from scratch, lol!

I've used Kitchen Bouquet--but sparingly because of the sulfites (dried fruits and wines have them too) but it has no msg.

Comfort food...a good chicken noodle soup or a stew on a cool night. Baked chicken with mashed potatoes/gravy with biscuits is also a favorite.

That's not the kind of thing I can serve at my house, although my younger son might love that.

That recipe sounds amazing!!! Total comfort food! I would probably make it for myself on a smaller scale, and use ground turkey. My guy can't have sugars and carbs very much and he would absolutely demolish this so I don't dare make it.

I love that show, too!

My food allergies would keep me away from that dish. :(

Hi Tina .. comfort food is an essential - and easy eating food - sometimes when I'm out and exhausted the need to use a knife and fork becomes redundant .. a good meal eaten with a fork only ... no cutting, just eating and enjoying.

Good for you .. I know I made chicken soup at the beginning of year when I was out of it .. a whole chicken, lots of veg .. leeks, carrots, onions etc (whatever else was fresh) .. simmered for an hour or so and left to cool off ... lasted me a while - but was rejuvinating ..

Someone is Special said...

Sounds great.. The sauce is new to me. I shall try it once :)

Hmm. All of a sudden, I'm hungry. I wonder if we've got a hamburger in the freezer. Pretty sure I've got the mashed potatoes... *wanders off talking to self*

I actually don't have anything I would classify as a comfort food. Soups are a great favourite, especially if I am feeling unwell, and I always have lots in the freezer. I too have never heard of the seasoning.

Hope you are beginning to feel better and if the foods comfort you, well and good, eat them. I'm not big on ground meats, beef or turkey as you may have noticed from the recipes I post.

Have you missed me? Of course you have :)

If Tina likes that recipe, I reckon that Gary would like that recipe. Of course, some of the brands mentioned are not available in Britain.

Thanks for a posting that gave me food for thought and spiced things up, somewhat.

As ever, your adoring fan,