Today I'm turning over the reigns to Briane Pagel to help him promote his latest book. Take it away, Briane! 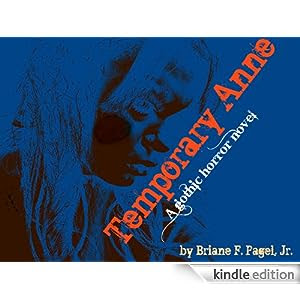 Welcome to DAY ONE of the release tour for my newest book, Temporary Anne.

Temporary Anne is a horror story about a woman so desperate to avoid Hell -- the fate for the evil she's done during her life -- that she makes things infinitely worse after her death.

To celebrate the release, I'm doing a blog tour.  Today is the first day. Here's the schedule for the rest of it:

It's going to last nearly a month, and here's why: Each stop of the tour will feature not just a snippet from Temporary Anne, but the creation of a brand new horror story, written on the go, by me -- with suggestions from you!  The story will grow based on comments from the blogs and the hosts of the blogs, and at the end, you'll have received a FREE horror story, just for reading! THANK GOD FOR AMERICA. And other countries if you belong to those. Except for that country where the Calormenes lived.  Screw them.

So let's get into this.  Here is today's snippet from Temporary Anne. It takes place as Anne has gone for a midnight swim, nude, in front of a lonely fisherman -- only to run into some trouble and start drowning:


What I saw more clearly than the sea was a flowing, pulsing, corpuscle of heat and fire.  Hell is not fire and coals andbrimstone.  It is hot, to be sure, or at least my entryway was because I would get no closer than that at that time.  Hot enough that it felt like my eyeballs were blistering.  Hot enough that my skin felt tight and dry and pulled off and shredding already, even though I knew I was still in the ocean because there it was around me.  But this was not flames and hot rocks and burning trees.  It was like flesh made into fire.  If you have ever seen someone cut open in an operation, and seen the quivering, gelatinous, slobbering mass of cells and slime that make up the layers between our skin, you have seen what my Hell was built of: a flowing, slimy, quivering, pulsating mass of burning material.

Hell is the inside of a blister that stretches across infinity.

AND NOW, for the main event:  The Beginning of The Story:

This Is How I…

The expectant faces before me, the throngs of people waiting to hear the story of how I came to write the first-ever horror novel to win all the Nobel Prizes (even Chemistry!), do not see why I pause.

Or I assume they do not.

But I cannot look away.

Having looked up from my notes, having paused to adjust the glasses I wear in order to look more… studious, I cannot now tear my eyes away from the specter I have seen off to the side, but I dare not look directly at it, either.

I want to say, this is always how it is.

I want to turn to the assembled multitude – I see Stephen King there among them, and the Vice President of the United States – and say to them I think this is nothing to worry about, I think this is what I should have expected, but…

Something is… different, this time.

It is not unusual for a writer to imagine, I suppose, that his creations are in fact real, to breathe life into them, to make them real… in his mind.  And for a long time, when I first began writing, that is all I thought these, these, these apparitions, were: real only in my mind.

That is, I would begin to think up a story, I would begin to jot down some ideas here and there, first in a notebook I used to carry with me for that purpose, then on my smartphone, ultimately on a notepad on my tablet, the horrors of yesterday merging with the technology of tomorrow, and maybe that is what did it?

Maybe that is when these things stopped being imaginings that I would toy with as I drove or walked or ate cheeseburgers at the McDonald’s down the road? Maybe when I lent them more and more power – for the energy, once potential, in a pen-stroke in a notebook is surely less than the required batteries of electricity that keep my computers running day and night? – maybe that extra power storing the thoughts I stirred was what brought them to life?

Enough to say they came to life.  Where once I had lay in bed, at night, thinking that the next morning I would get up early, write chapter 2, and ponder what would happen in chapter 2, now, more and more, I did not need to speculate at all, as the things happened before my eyes, with an increasing lifelike cast, and, as you would guess, a corresponding increase in the pall these visions cast over my life.

Who wants to see murderers and ghosts and man-eating insects and the even more esoteric visions my mind could throw at me?

You’d think it would be like being at, maybe, a horror movie festival, and that would be great, if you like horror, right?

You’d think, but two things to keep in mind:

First, who wants to see that all the time, not just for two hours on a screen in a dark theater while you eat popcorn and wait for the credits to roll, but every second of every day, a constant montage of horror and spectacle all around me?

Second, who, subjected to that, wants to have to wonder if this isn’t a hallucination at all, but rather, watch murder and fire and mayhem and monsters around him and think I believe this is real…?

“This…” I tried again, shaking my head to try to get the image out of my mind, “is how I…”

OKAY, your turn: help Tina out.  What happened next? You, and Tina, get to pick:

An event that takes place as I began talking again, and
A character -- name, identity, species all up to you -- who enters the story at this point.
Watch for the continuation of the story on Andrew Leon's Strange Pegs Monday!

AND FOR TODAY ONLY, GET TEMPORARY ANNE FREE!  That's right, FREE! Tell your friends! A this price, it's like you're stealing the book! Take that, Jeff Bezos!

"That's a lot of infinity!":  http://www.nonsportsmanlikeconduct.com

"In my defense, I didn't know what whores were" : http://www.troublewithroy.com

This has been a production of the Vince Lombardi fanfic group:  http://www.nonsportsman.com

Seeing horror every day would be like living in hell.
Good description of it. Don't plan on ever confirming the accuracy though.
Good luck with this venture, Briane. Too early in the morning for me to speculate where the story will go next.

Alex, I don't know if I could keep up with your imagination -- but stop back after a cup of coffee if you decide to make a suggestion!

Tina: Thanks for this post! I should have mentioned that if you click the link on "And For Today, Get Temporary Anne FREE!" it'll take you right to the site on Amazon.

This sounds super creepy and I got my copy from Amazon and can't wait to read it. Thanks Briane.

I think one of his visions kills an audience member. His or her wonderful horrors have breached from his mind and spilled out into the real world.

Can anyone else see them? Or just the carnage they inflict?

Great stuff, I already picked up my copy!

Off to check out your blog!

Since you have Stephen King in the audience, I think it attacks King. But not in a way that can't be explained, because no one else can see the horrors. So the speaker sees the... whatever it is... push through the crowd to King. Some of the people realize they're being pushed but don't know by whom, some instinctively move out of the way. The thing walks over to King and either uses its sticky tongue or some kind of suction finger (I can't decide) to pluck out King's eyeballs. Mayhem ensues. The thing looks at the speaker in a sort of "you could be next" kind of way.

Hell is the inside of a blister that stretches across infinity. nice...cool start to the story....hmmm...not sure where to take you next...i will give it some thought as well....and hey free books, i am down with that

Given my opinion of King and his attitude towards ebooks, I am totally on board with that suggestion. I'm glad you spared the VP. I like him.

YOU HAVE AN AWESOME NAME. Also, we share a mutual love of free stuff.

And then you wake up to find your sheets stained with blood and Stephen King's dismembered corpse in your bathtub. Bwahahahahahaha!

Nobody has an evil laugh like the Grumpy Bulldog (TM!)

I see you have made note of the extremely successful Stephen King, writer of the run-on sentence that has way too much info in it and may well be longer than this sentence that will abruptly end.

Maybe this is all an hallucination and you have only imagined my comment.

Good luck, my friend. As per usual, I shall share this on various social 'notworking' sites, even 'Farcebook'.

Good of you to do this, Tina. A peaceful weekend to you and all your starstruck fans!

I feel like perhaps your comment was a metaphor. A riddle, an enigma, one I am forced to try to unravel... but alas, I am at home now, and there are baths to give to 7-year-olds, and pizza to be eaten.

Tina: I'll check for more comments later on, and thanks again for hosting Day One! Let me know what you and the commenters decide!

Nothing need be unravelled. Tina will know that I am in the background and discreetly promote.

I am one who doesn't get involved, as such.

You made no mention of what the toppings on the pizza were. Perhaps this is left to the imagination.

Be well and fulfilling writing.

There are better pizza toppings -- mashed potatoes, for example-- but tonight was a night for basics.

Mashed potato on pizza. Why not. Enjoy your weekend. Three in the morning! Tina, can I have bonus points for commenting at the point of exhaustion?

Gary: Yes, but of course. You always get all the bonus points, my most generous of friends.

Briane: I'm going with Andrew's Stephen King idea. My first thought when I read your beginning was, "Something needs to happen to Stephen King". Sorry, not a fan. So do to him as you will and I look forward to what happens at StrangePegs on Monday.

Thanks for livening up the place today. AND, I've actually heard of potato pizza. "Best Thing I Ever Ate" is a wealth of info ;-)
Tina @ Life is Good

You've got it, Tina. Seems fitting that Andrew's suggestion carries into Andrew's blog. See you Monday! And thanks again for hosting. And, having checked out Gary's blog, he DOES get all the bonus points!