The Engineer bubble wrapped my house. Ok, not the whole house, just the windows. Ok, not all the windows, just the ones I don't need to see out of. I just liked that opening line.

Some of you have heard some of the stories about what my Engineer does for fun. It's not what most people, or even most engineers would do. He's kinda like the dad in “Chitty-Chitty Bang-Bang”. He invents things.

I read this description in Debi Pearl's book, “Created to be His HelpMeet” and it fits him to a T.

“Mr. Visionary will take out the trash if he remembers it. But he may also end up inventing a way whereby the trash takes itself out, or is turned into an energy source, or he may just waste a lot of time building you a cart to take it out. He will not mind cleaning up if he notices it needs doing, but he may get so deeply involved that he decides to paint while he is sweeping, and then will switch projects before he finishes painting.”

That part about the energy source is really key. His first project love is alternative energy. For 10 years we had a wood-burning fireplace that used the existing forced air ducts that he hacked into, added fans (from the recycle bin at his day job because “we're changing parts and throwing these perfectly good, NEW fans away”) and blew the hot air from downstairs up to the main level.

However, I got asthma, so no more wood smoke. We now have radiant in floor heating, where water, heated by a special hot water heater (that he found on craigslist for a song) circulates through pipes under the floor.  Then that hot air rises.

What about the bubble wrap? Getting there.

The whole system isn't finished yet, only about ½ the rooms have the in floor heat. So he decided that we needed some more insulation to keep the heat that we have produced IN. Of course, not regular insulation.

He read somewhere that if you squirt a window with water, bubble wrap will stick to it adding enough “R factor” (um...used to measure the value of the insulating quality...these are the parts where my eyes usually glaze over...I mean, I've already said yes to the (slightly crazy, admit it) bubble wrap, I don't need to know HOW much it will work) to equal another window pane.

This is key on our back patio door because we've had to blow-dry it every morning to get it to open. (We were dog sitting – it was the best dog exit, but no more) Now it looks like this 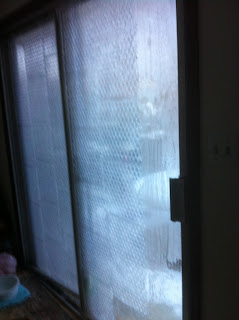 No, we can't open it. But we don't need to now that the dog is back home. We also “wrapped” the boys' bedroom windows because they always leave the blinds closed, so who cares. In addition, we did our master bedroom window 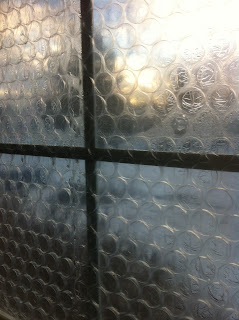 because we haven't bought window treatments yet. It gives some privacy. And the Christmas lights look really cool shining through it as you're trying to go to sleep.

There is one last window – my “office” window from which I'm writing this. I needed to be able to see out, so it's partially done. 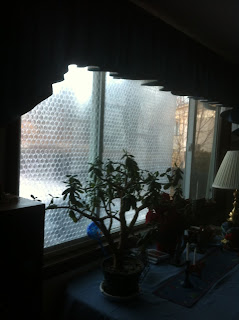 Questions? Yes, it's helping. Yes, it looks a bit weird from the outside, but I'm pretending that we've decorated the windows for the winter...you know with snowflakes. And yes, I'm a bit insane too.

And you thought bubble wrap was just for popping as stress relief...

Bubble wrap. Not just for the accident prone anymore...

Let us know if it works. This may be the new look.

ha and here is was all prepared for some outlandish things to do with bubble tape...hehe...this is pretty cool actually...and it works, now that is the kicker...

Wow. there's an idea I'd have never thought of. I think it looks really cool from the inside. :) I'd never be able to resist popping all those bubbles though.

What a great idea! For quite a few years, we covered our windows with a sheet of plastic, but bubble wrap would insulate so much better. Your hubby is one smart cookie. We finally got rid of the plastic last year, and installed double-paned thermal windows. It's wonderful to be able to open the windows again, and to actually see through them. (Our cats are really happy about that, too.)

Hi Tina - sounds an interesting DH to live with!! You've obviously adapted to seeing his best side - bubble wrap or not. I sure hope it keeps the warmth in ... and that by next year - the house might be all radiant heated - spoils the fun though.

I'd love to have an engineer hubby ... one had better hurry up and come along - or it'll be too late!!

Hope you have an easier year ... cheers Hilary

That looks beautiful! Are you not tempted to tear them off the windows and start popping though?!

Here are the answers to your questions so far:
JoJo -- the bubble part is on the window because that traps more air between the bubbles.

Ghadeer -- we have PLENTY more to pop...The Engineer also runs an eBay business, so any wrapping materials that enter our house, stay until used to pack something to send...

Ingenious. Although I'm sure I'd still be popping it while it was stuck on the windows - I assume it's not so effective then?

Yay, I thought I would um 'pop' over to your site :) You certainly wrapped up this posting very nicely.

A question, do you think that when you pop bubble wrap that it sounds like a crackling fire?

I've never heard of this before but what a wonderful idea!

That is seriously brilliant!

We just go with sealing off the front door with duct tape.... which reminds me, I haven't done that yet. No wonder it's so cold in here...

alright, missy. i read it through (finally!) cover to cover, and i think it's neat that yall did this and hope it helps. It really does look cool!

The urge to pop them must be overwhelming. Haha! Nevertheless, that’s an interesting use of bubble wrap. And yes, it does add a look for your windows, and the sunlight going through it must look interesting, especially just after sunrise and before the sun sets.