B is for Boats 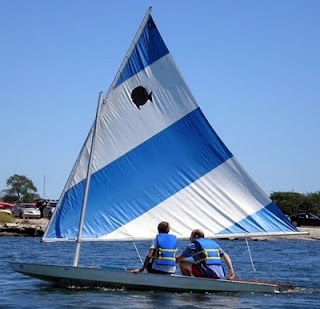 Our first boat was a Sunfish, and wow, were we proud. My parents had taken a boaters' safety class, and learned the bare essentials of sailing. We were all set. I can't remember sailing before this, so the experience was new for me. My American grandparents had exposed me to motor boats, and Dad's best friend in Sweden had a motor boat on Nordsjön, but as all sailors know, sailing is NOTHING like being on a motor boat.

Sailing is more like flying. When you hit the wind just right as you “hard alee”, you can hear that wa-oomp as the sail fills, feel the lift and pull as the craft takes off, and then there's only the waves lapping and the wind whistling, no motor, or diesel fumes to spoil the experience. Magic.

A Sunfish is not a big boat, but it's a perfect starter boat. You don't need an “official” boat ramp. You attach wheels to the back of it, pick it up by the handle on the front, walk it into the water, remove the wheels, raise the one sail, and you're off. (Ok, you do have to attach the rudder, and once your clear of the bottom of the creek, lower the center board, as my sis pointed out as she proof read me.) Bring a paddle with you, because there is no emergency, helper motor. And since there is only the one sail, you don't have to learn about the gib vs. the main sail and how to maximize their working relationship. Nor do you need a spinnaker for the “run” home.

It's supposed to seat two. In the small cockpit. But we were a family with three kids. This meant that we were never together as a family on that boat. To this day I don't know how my parents rotated who took which kid and when. I do remember my dad had all three of us kids precariously perched that one time. You're not really supposed to have anyone in front of the mast, but that was the most coveted spot. You didn't have to duck during a tack, and you can stick your hands and feet in the water (if you could get away with it, that is...does slow things down and mess up the trajectory a bit on a craft this size...and these are acts that would never escape Dad's notice...)

Dad is an instinctive sailor, born for it. He took what he learned and just went for it. Like an old salt, he'd watch the sails, and the ripples of the wind in them, and the “tell-tales”. (They look like pieces of yarn that someone forgot to cut off while making the sails, but you want them laying nicely on the sail, parallel to the cockpit.) He knew which tack to pick, he knew when it was time to turn for home so that the dying winds wouldn't be ready for their obituary before we made the channel. I love sailing with him.

Mom, though a competent sailor, is more of an adventurer. She doesn't mind tipping over the boat, getting stuck literally up the creek. She, as in all parts of life, is along for the ride and the lovely people she'll meet along the way. There are days that I'm in the mood for that, but it's not usually on a boat. When I'm sailing, what I want is solitude, waves, and relaxation of the most relaxing kind. I don't find it relaxing trying to right a boat in murky water, and then paddle it home in the doldrums, after having spent an hour “meeting the nice people in the red house at the end of the creek.” What I want is what Dad also wants out of sailing. Hours upon hours of the only words spoken being, “Ready about!” “Hard alee!” And then, unfortunately, “I think we should head home now.”

I started this post about boats, and was going to tell you how we ended up with a 36' cabin cruiser that slept six...but it went elsewhere. Guess I'll save those stories for another day. After all, it took four more boats to get there...

How have we never exchanged sailing stories? Maybe it had something to being landlocked, so sailing didn't come up in conversation much. We sold our (Q's)little sunfish last summer, and took our little Potter up to the island several years ago. We found we preferred canoes for Union Reservoir! We did try chartering on Lake Grandby a couple of times, but the wind is crazy in that bowl, and you are either sailing madly in 40 knots, or in doldrums. Nothing in between.

We used to sail every weekend and some evening during the week when we could work it in. I miss our days on the lake. Thanks for sharing this post.

Love this story. Tell me a vignette about it. One incident. Isolated. You are a good writer.

Lovely post - and odd that we were going around on similar themes.
When The Great Dane and I sailed he liked to be whipping around and I liked nothing better than a windless day, a dropped anchor and a good book - that's my kind of sailing!
Yikes! - the verification word is 'restsong'!

I could feel the wind on my face as I read your post. Love the sunflower banner.