Hejsan klass!
Before we begin today's lesson, I have a few announcements.

** I have new navigation buttons installed in my sidebar.
“Surprise me!” takes you to a random blog on the list of 1796 participants.  (Yes, the list was longer, but we've been deleting links to blogs that aren't participating.)
“Next blog” takes you to blog #1 on the list, and then next time you hit it, it will go to #2

** These buttons will be available for participants to put on their blogs in just a few days. We're working out the kinks first. Don't be alarmed that it just says I've visited 2 blogs. I've been to a LOT more than that...just not since I installed them.

**On May 7, all challenge participants are invited to write a “reflections” post sharing what they experienced during this year's challenge. If you'd like to read one to get an idea, here's mine from last year.

Alrighty then, let's get to today's lesson. Today you will learn two new words because they are practically inseparable: kaffe kopp.

Have you guessed the meaning? Coffe cup. Swedes like their coffee. They like it hot, dark, strong, and several times a day. Drinking coffee is a major social event, and it's a frequent one.

Of course there's coffee for breakfast. Then in midmorning, there's another cup. If someone has “stopped by”, that midmorning cup is served with some sweets that the hostess “happens” to have on hand. Coffee is consumed with lunch. Mid afternoon, an unarranged coffee visit might occur again, and the ritual is repeated. Yes, Swedish hostesses need to be ready for visitors on a moments notice. With lots of sweets.

After dinner, there's more coffee, and in most of the households where I've stayed, there's later the “evening food” which is a before bed snack. As I recall, we are by now done with coffee, and tea is served with this food.

Please keep in mind that a lot of these memories are from when I was nine, and the freshest are from my teenage years. I know Farmor and Farfar were so happy to have us visit that they wanted us to visit all their friends. This made for two-a-day coffee parties for teenage girls who would rather have gone on a boat ride, or downtown to shop, or even for a walk in the nearby woods.

We were dutiful granddaughters though, and went to all of these parties. I don't know if the other women of my Farmor's generation had as much china as she did, but here's a selection of kaffe koppar (plural) from the sets I inherited. 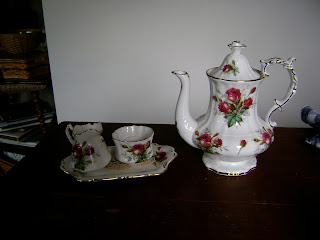 This one is called Grandmother's Rose, and I have the entire set, this is just the serving pieces.  I have them in a china cabinet on display, but with the light coming in my patio window, you couldn't see them at all, so I pulled these out so you could see them.  These were my favorite since childhood. 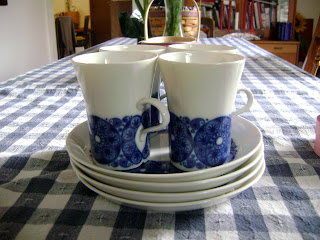 These blue cups and saucers are part of another set that includes creamer and sugar and serving plates. 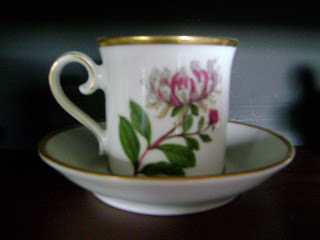 These flowers are called "Vildkaprifol" and are the official flower of the county "Bohuslän".  I have 12. 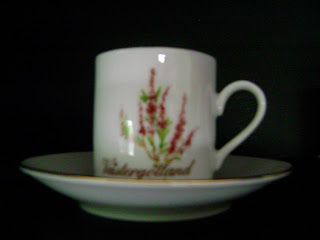 This kopp is from another set of county flowers.  It's ljung (name of flower) and from the county of Västergötland.  I have 8. 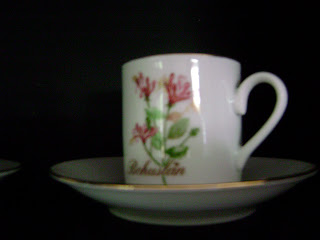 This last kopp is another company's version of the kaprifol from county Bohuslän.  If you compare the two, you'll notice similarities, and differences.

This is not all the china Farmor collected.  Remember the matching clothes?  At least with the china, she didn't repeat.  My sister has just as much as I do, but in different patterns.  My brother didn't get china, but he got most of her antique furniture as I recall.  All's fair.  Wanna come over for kaffe?  I have lots of koppar.

I've been a terrible student, and not been to all your classes, but I will now be able to offer kaffe to my Formor (I think, was that right?)

What an interesting blog :-). I am trying to visit as many participants as possible, but may only make once to each.
This is the first time I've participated and am thoroughly enjoying it.

Hang on, I'm going to grab my kaffe kopp.

Tose cups are so pretty. I could definitely get with this Swedish coffee tradition. Another cup? Yes, please.

I wish I liked coffee more, you make it sound so nice. The china collections are very pretty. My mother keeps passing her china sets on to me - she says she doesn't have room for them anymore, neither do I but I can't say no.

ok seriously second to i love you from yesterday this is probably the second most important words to know....coffee and love..yep that is life...did we cover, where is the bathroom yet? smiles.

If you've the time, please pop over to my blog. I'm the author of the Bella and Britt series for kids.

Thanks!
PS Am following...

I was just drinking my coffee reading this post about.... coffee! love learning about different cultures and those china sets are to die for. I have a side board and a mid-century modern side board filled with all kinds of china! love this kind of stuff! Enjoyed it!

I'd be in trouble as I don't drink coffee.

The French-Canadians are tea all day folks. Breakfast, dinner, supper, and lunch (late night snack). I can't remember what my MorMor called the meals but she loved her coffee hot, black, and strong.


Thanks for installing the buttons. They are pretty cool!

What a great idea for a blog...I should teach Welsh to people. I love the new buttons that were installed thought there are still over 1800 participants on my list.
Rhia from Five Minute Piece for Inspiration (around # 793 on A to Z list)

This post reminded me of our mutual Swedish friend Dorothy, who had her special coffee klutch that she participated in for decades.... :)

A very Special 'K' post with thoughtful and treasured memories. How lucky you are to have such rich cultural experiences, and the Kaffe Kopp sets. They are truly Family Heirlooms.
Sue CollectInTexas Gal

I love your theme! This is a beautiful post! Sorry I haven't made it here until now. :(

I love the new buttons, how cool are they?
I'm sure your Farmor and Farfar did want to show you off to their friends, bet they were very proud of you both :) The kaffe koppar are very lovely heirlooms to inherit.

such lovely china! I wish I could come over--I could use a cuppa right now.

Thank you for the visit to my bog. I was delighted to see your K post as well! I am of Swedish heritage. My Dad's paternal family immigrated from Sweden in the late 19th century. The name was anglicized - curiously and almost unpronounceably - as Tohline. It was originally To(with umlaut)lin. (For some odd reason, this font won't let me give you the correct "o.")

I am enjoying this challenge so far. I am flying by the seat of my pants - writing each day for the day. It gets a bit hairy sometimes, but so far so good!ö

In Germany a lot of people drink Kaffee = coffee = kaffe.

The similarity is obvious.

I changed from coffee to tea sveral years ago.

I don't like coffee, but often seeing things like this I wish I did. Your coffee cups are so pretty and its great that they've been passed down through your family.

I don't think anyone will be after our mismatched and chipped IKEA offerings!

Beautiful cups. Thanks for sharing.

You have the best China! No coffee for me, please. I'll take tea instead, so I guess I won't be using this lesson often....it may come in handy when I'm entertaining guests though :)

Those plates and cups are just gorgeous! Thanks again for stopping by and mentioning the "Surprise Me!" button.

This is another important one for me! I've got to have my coffee! Thanks for the lesson

I know all about this with my Scandinavian heritage. My mom has some pretty Kaffee kopper with a flower pattern. They even say Kaffee, and some other words.

Play off the Page

Beautiful lesson on the Coffee Cup! I need to add all the info you talked about today :)

I love the idea of the new buttons, especially "SURPRISE ME". I was thinking of trying some mathematical series to choose the blogs to visit :D Its such a long list :)
GREAT IDEA!!! (Thumbs up :D )

I am not a A to Z participant, but you can support my friend who is a part of it.Will be glad if you swing by her blog :) Here is the address:
http://www.doodlingwords.blogspot.in/

I am enjoying reading and learning from your blog.