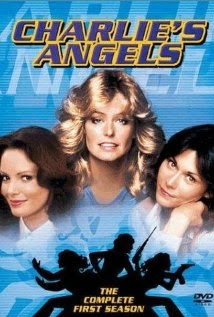 When I was in 5th and 6th grade my favorite TV shows were The Brady Bunch, Charlie's Angels, Fantasy Island, and Love Boat. I took the Charlie's Angels obsession pretty far, though. My friend "Diana" and I would get together for play dates and act out episodes of the show.

First of all, I can't believe my mother let me watch those Aaron Spelling shows. I remember her (or maybe it was the Swede) saying, “You watch, there will be a woman in a bikini, for no apparent reason, in the first ten minutes of the show.” Sure enough, there was. I don't suppose 11 year old girls were the demographic he was actually going for with that move, but we sure loved the show. Action, danger, spying, detective work, undercover secret missions, spy gadgets – it was awesome.

Diana was rather bossy (um, yes, there are people bossier than me) and would decide what mission we were on, record “Charlie” telling us our mission, and play it back on her tape recorder. We'd get our equipment ready – we had a lot of stuff, most of it homemade out of other things.

Blocks of wood, painted and with a pipe-cleaner antenna were our walkie-talkies. We had ID cards, carefully typed up and aligned on an old, manual typewriter.  My mom even let me use an expired credit card. I tried some security by taping over the number with masking tape and putting a new number there. I'm sure that would have stopped any nefarious use...We also had check books – old checks with the account number cut off. We had great fun "buying" stuff to outfit us for each assignment.  Accessories are always an important part of the mission!

Our purses were probably our best accomplishment. We each had several. Some were real purses bought with hard-earned money, but most of them we made ourselves. We had rudimentary sewing skills, so a draw string bag could be accomplished as could flat ones, like a clutch purse. We also made a lot of stuff out of cardboard and scotch tape.

We really got into character. I was Jill (Farrah Fawcett, I was blonde after all, and aspired to have her hair). Diana, who was of Indian descent was Kelly (Jaclyn Smith). Mom even let us put on make-up for the occasion. As you can see, we were quite stylish. 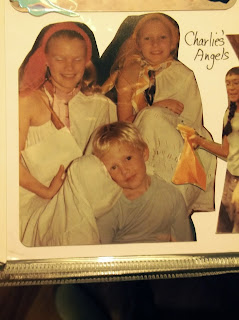 Here I'm playing with Swissie, and DataBoy got in the picture. Of course my eyes are closed so you can see my nifty blue eyeshadow... 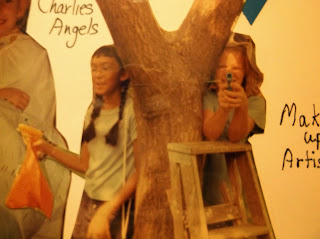 This was an undercover assignment as cowgirls. We got to carry “guns”.  That's Diana on the left (and part of the other picture from my album.)

With only a few hours of TV allowed a week, we made the best use of what we saw and had hours of fun recreating the episodes, as accurately as possible. I'm glad Momarazzi documented it all so I can show you more embarrassing childhood photos...

What made up games did you play? Did you ever watch Charlie's Angels?

I was a teenage boy - you bet I watched that show! And I did appreciate the random girls in bikinis.
I remember reenacting scenes from Wild, Wild West, especially when I lived in Arizona.

HA! I watched it but never reenacted it! I also liked Wonder Woman, but who doesn't love Lynda Carter!
I always played Star Wars, or Doctor Who, no one would play Doctor Who with me because no one but me watched it.
Good times..

I was an avid viewer of Charlie's Angels, never misses an episode.
What fun you had, enjoyed the read.

My cousin and I used to play a western themed game b/c we watched Bonanza all the time (we had huge crushes on Michael Landon), and Little House. But she & I were always boy/male characters. She was Joe after Joe Cartwright & I was Mike after Michael Landon. We just called it 'the game'. We had capguns, cowboy hats, vests, pouches, powder horns, fake rifles my dad made out of wood & a copper pipe, then spray painted black. We played in the field behind my house, or the woods, or at the cranberry bog. We built a fort across the driveway at the edge of the woods.

I never watched Charlie's Angels; I've never even seen one episode in my life!

What about the high heels they ran in, chasing the bad guys? You forgot to mention those.

ha i remember the angels...and how lucky charlie was...smiles....def had the shows that led me on some merry chases as well...Ateam....uh huh...ha

Oh, yeah, I watched Charlie's Angels, but I never played it.
We played Battle of the Planets. Sometimes Starblazers.
And Star Wars.

i never watched, but i knew ALL about it, and the infamous red bikini poster...

'm not sure if these things were on TV when I was a kid, but I don't think they were on in the UK anyway. I really didn't watch much TV as a child. There wasn't that much available in those days.

I loved Charlie's Angels, but we never played that. Mostly we played totally made up stuff.

Awesome that you still have those photos! I was a big fan of BUCK ROGERS and DUKES OF HAZZARD.

Hi Tina .. I enjoyed Charlie's Angels - back then .. and always thought Jaclyn Smith was exotic looking .. but blonde with a broad smile was pretty enticing too ..

I expect we played cowboys and Indians .. but I honestly can't remember what we played, but we played and played ..

I watched all of the above and enjoyed them so much! I also watched and was (on occasion, when I was in a crime fighting kinda mood) Wonder Woman. Oh!...I wish I had the kind of tangible memories you have, like your pictures. Way to go Mom!!